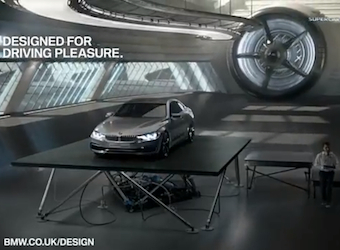 German automaker BMW’s new sound logo will be played at the end of television and radio spots in the hope of further engaging consumers through sound recognition value.

“As part of the evolution of the acoustic branding, BMW replaces the ‘double gong’ with a new sound logo, which gives the brand a distinctive modern, aesthetic and dynamic recognition factor and can be used in many different ways worldwide,” he told LuxuryDaily.

BMW has used its ‘double gong’ sound for the past 14 years, but wished to modernise its approach. Sound designer Thomas Kisser of Hastings music media helped BMW realise its sonic vision.

Listen out at the 57-second mark of this spot:

“One of the biggest problems in advertising today is the low association scores that many TV commercials receive,” says Al Ries, founder and chairman of Ries & Ries, a Roswell, GA-based marketing strategy consultancy.

“Many consumers remember a commercial, yet do not associate the commercial with the name of the advertiser… a signature sound or a sound logo can help increase the association scores of BMW commercials,” he adds.

Although it may not be noticeable to consumers, music and sounds can be especially memorable overall. Beethoven’s Symphony No. 5 is used as the example by Ries when discussing the BMW sound branding move.

“It certainly is possible to create a sound that is strikingly memorable… take the first four notes of this melody – every musician and most consumers can instantly relate to these notes,” he says.

Tags:
Previous Article
TV is still the world’s pastime
Next Article
Marketing’s lucky number is one