It’s that time of year again: April Fools. And companies and PR teams are having some fun. We’ve wrapped up some of the April Fools jokes doing this rounds this morning. Well, we are hoping they are all April Fools pranks…

News broke this morning of a cocoa crisis threatening the world’s chocolate supplies. Comparison website Finder.com.au claimed its latest research revealed chocolate supplies will be gone by the end of the year due to increased demand.

Thankfully Finder set up a comparison page so serious investors can go online to see just how much cocoa is in each chocolate bar.

Here’s a ‘news report’ about the cocoa crisis causing people to start stockpiling chocolate, and even talk of synthetic chocolate.

Vegemite announced its latest move to turn its production factory in Port Melbourne into a 60-metre tall Vegemite-shaped museum. The apparent five-storey museum would be visible in Melbourne’s skyline at all times and even have a ‘Mitey Bite’ cafe for visitors.

It seems a few media outlets were excited about the press release, embargoed for this morning, and prematurely posted stories yesterday.

Pedestrian TV received criticism on social media after it posted the story early without realising it was all an April Fools joke.

Did @pedestriandaily take an #AprilFools release srsly? I don’t know anymore IT’S ALL SO META. They broke embargo tho pic.twitter.com/h2Wlorq0lL

It has since posted an apology article, saying:

“Earlier today we posted a thing about a thing that wasn’t supposed to be revealed as being a thing until tomorrow. Anyway, we got bit. Fortunately the entire Australian media industry was there to point it out many times over. And for that we ~could not be more grateful~.”

“Bricks and Mortar is now officially available from Kogan.com — we’ve even gone to the lengths of bundling the two products together rather than have you search to see what goes well with bricks,” the blog says.

Kogan has listed the ‘bricks and mortar bundle’ as a real product on its website: 10 bricks and 500g of mortar for $99 with free shipping.

The company’s founder and CEO, Ruslan Kogan, is quoted in the blog saying the move has been “a long time coming”.

“People have been asking me for years if Kogan.com will become a bricks and mortar retailer. I knew that Aussies love getting the best prices on the latest products like LED TVs and iPhones, but I had no idea so many people were after building supplies.”

The blog post then goes on to claim that celebrities, politicians and beloved fictional characters have been flocking to Kogan to do their shopping “knowing there’s a higher chance they’ll get noticed when they do their shopping in a bricks and mortar retailer”.

Here are a few of our favourites:

Hair product brand VO5 released this video promoting a new hair clip featuring micro-sensors that monitors hair and provides real-time feedback on its health and appearance. The brand says the product will be the first of its kind in wearable technology and hair management.

Users keep track of everything on the VO5 Hair Fit Clip app that can even post to social media accounts on the user’s behalf to “let the world know just how your hair is feeling”. The Hair Fit clip has an 8-hour battery and is solar-powered to monitor hair at all times and in all environments.

Asian food brand Chang has made a ‘scientific breakthrough’ with the announcement of its limited-time-only ‘gluten-free gluten’ range.

Chang general manager Elaine Pow says in a press release that the company has “managed to find a way to extract the gluten from gluten”.

It will apparently come in a few flavours including sweet and sour, tastes like chicken, and ‘mystery’ gluten-free gluten for ‘those who enjoy a surprise’.

“The result is somewhat of an acquired taste but the thought of eating gluten that is gluten-free will win fans over we are sure,” Pow said. 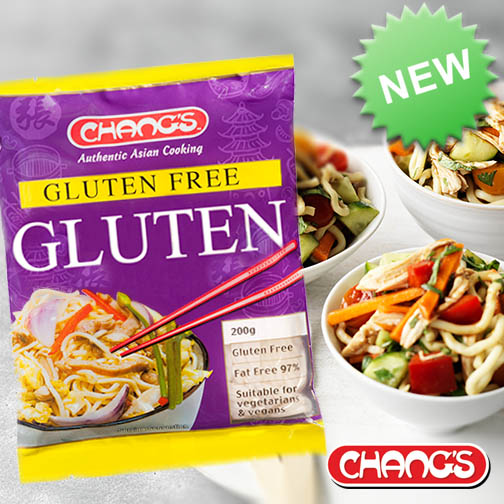 Wearable tech seems to be a common theme this April Fools with LED lighting company Brightgreen announcing the launch of its custom-designed LED Tru-Colour hats.

The LED company decided to branch out from the home lighting its known for, due to the “incredible demand” for an appearance-enhancing product they can wear.

“Available in a range of styles and sizes to suit any occasion, each hat features an arrangement of the world’s smallest Tru-Colour LEDs pointed directly onto the wearer’s face – allowing them to be seen in the best light all of the time!”

Tags:
Previous Article
Pepsi got in first, but Coca-Cola Life’s launch marks declaration of the Green Cola Wars
Next Article
Unilever’s Marc Mathieu: “Start-ups are pioneering the future of marketing”