Coca-Cola has one of the most famous logos in the world but the soda giant is choosing to remove it from Coke cans around the Middle East this Ramadan period in a marketing campaign aiming to get consumers thinking about prejudice.

The campaign, entitled ‘Remove labels this Ramadan,’ falls under Coke’s umbrella campaigned named ‘Let’s take an extra second’ which calls for people to spend some extra time with someone to get to know them beyond a first impression.

The campaign, created by Dubai-based agency FP7/DXB, part of McCann Worldgroup, has seen the Coca-Cola logo replaced with the message ‘Labels are for cans not for people.’ 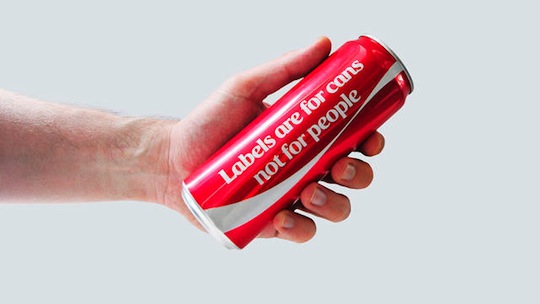 “In the Middle East, a region with over 200 nationalities and a larger number of labels dividing people, these Coca-Cola cans send a powerful and timeless message that a world without labels is a world without differences,” the agency said in a statement.

“And that we are all basically just the same: human.”

The ad shows six people meeting in a dark room and telling the rest of the group about themselves.

The group were quick to assume physical characteristics of each other based on their stories but when the lights came on and everyone was revealed they were surprised to realise that their assumptions were completely wrong.

The idea of changing the can design has worked well in the past for Coke with a previous campaign called ‘Share a Coke’ where names were printed on the cans was a major success for the Atlanta based company as sales in the US rose over 2%.