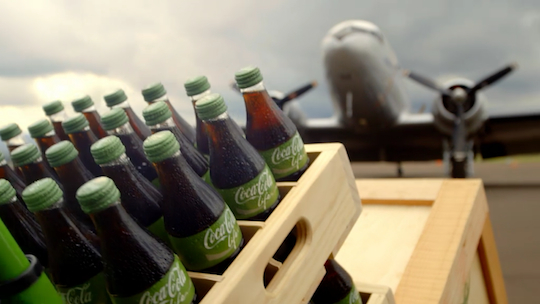 Based on the ‘Let Life Surprise You’ core creative, the new ad shows the company delivering its first Australian batch of the new drink to remote Norfolk Island, the community “least likely to expect” they’d be part of the major brand’s new product launch.

“With the launch of Coca-Cola Life, we want to intrigue, educate and engage consumers, and show that Coca-Cola will travel near and far to ensure our products are available for everyone,” said Lisa Winn, Coca-Cola South Pacific marketing director.

Norfolk Island is one of Australia’s most remote communities, 1412 kilometres east of the mainland with a population of about 2000.

The TVC rolls out today across TV, digital, cinema and mobile.

READ: Pepsi got in first, but Coca-Cola Life’s launch marks declaration of the Green Cola Wars »

The TVC follows the same concept as a video the brand released from Norway earlier this year, dubbed ‘Our smallest launch yet’, when it delivered that country’s first batch of Coca-Cola Life to a remote fishing village with just 307 inhabitants.

Coca-Cola Life contains natural sweetener stevia, which replaces 35% of the sugar found in ordinary Coke. The company says it created the new product to “shake up the category” in-line with its commitment to address obesity issues.

To find out everything you need to know about the marketing of Coca-Cola Life in Australia, check out our article from last week: Pepsi got in first, but Coca-Cola Life’s launch marks declaration of the Green Cola Wars.

Previous Article
TAC ‘Parental Role Modelling’ campaign targets parents of young kids in long-term strategy to reduce road trauma
Next Article
Is Foxtel most at risk in the new Game of Screens?