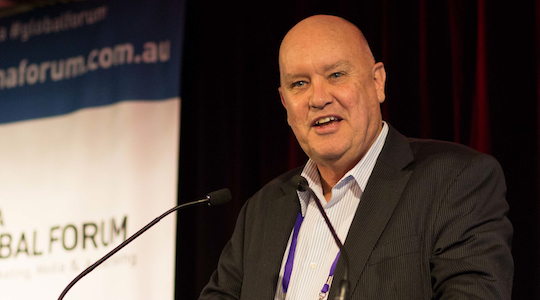 Freeing young women from the sex slave trade and human trafficking in Cambodia might seem an unlikely ambition for technology and business solutions company, Konica Minolta. But managing director, Dr David Cooke, explained how social responsibility has become a huge factor on many levels when it comes to running a successful corporate business. He was speaking at the 2015 ADMA Global Forum in Sydney this month.

Cooke talked about how it has become increasingly important to be active in this area. BHP Billiton has known this for some time. The company gives $250 million per year to charities and not-for-profits and matches contributions, dollar for dollar, of donations its staff makes, up to $50,000 per staff member. They call it their ‘corporate giving budget’ and many senior execs donate the maximum of $50k.

An example Cooke gave of how not being socially responsible can negatively affect staff attraction and retention was that a few years ago PriceWaterhouseCoopers was having trouble attracting top graduates to work for them. Although they offered a competitive salary with great perks, excellent career prospects, training and such, comparable to all the big companies the graduates were being interviewed by, the company wasn’t doing anything in terms of corporate social responsibility. Through research they discovered this was the reason that the company had the lowest uptake of employment offers to graduates until they completely changed their social responsibility to be in line with what Millennials wanted.

Cooke said when he became MD of Konica Minolta he invited everybody who had been in the company for 25 years or more to fly into Sydney to go out to dinner together, so he could thank them for the contribution that they had made to the organisation.

“And a lot of the people were technical people – we call them field service engineers – and they’re generally of a quieter disposition. And we had this dinner of about 15 people at a public restaurant. At the end of the dinner, a very quiet man, and I’m guessing this is the first public speech he had ever made, asked could he stand up and say something.

“He said: ‘I’ve been in this company for over 25 years, obviously that’s why I’m at the dinner. For a long time I never told anyone where I worked. I just couldn’t really see the relevance of telling people where I happened to work. It was just a job and it supported myself and my family. I came to work, I went home and I tried to do my best. It’s as simple as that.’

Konica Minolta is a major sponsor of Project Futures, which raises funds for programs dedicated to combating human trafficking and sexual exploitation in Australasia and South East Asia. Project Futures was inspired by the biography of former Cambodian sex slave, Somaly Mam, and was set up by Stephanie Lorenzo.

Cooke says: “You can spend marketing dollars, HR development dollars, introduce programs, you can do all sorts of things to build staff loyalty, and engagement, customer satisfaction, all that kind of thing. But all I guess I’m really saying that in the mix of all the things you can spend money on as a corporation, don’t forget one very, very powerful strategy, which is forming partnerships with the not-for-profit sector.”