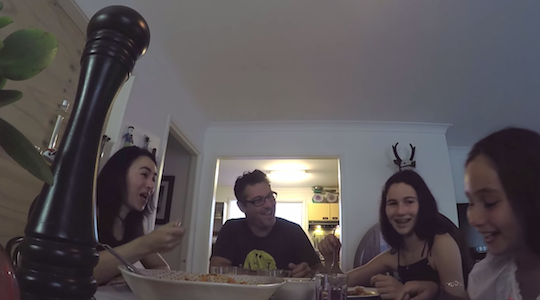 Dolmio’s newest campaign wants to reclaim family mealtimes, as family members have become more interested in technology than connecting with each other.

The campaign highlights the growing sense of disconnection felt by parents, as children appear less attentive at the dinner table and more engrossed in the technology they are using. Dolmio’s solution was a ‘pepper hacker’, a seemingly innocent pepper grinder that can also shut off surrounding TVs, phones and Wi-Fi for 30 minutes.

“We believe that meals shared with family and friends are often distracted by the very technology that is supposed to bring us closer together, so we’ve created the Dolmio pepper hacker to help connect us with the people in front of us.”

Leading the campaign, this video shows how technology-obsessed Australian families reacted to their devices being switched off before dinner. Despite a few yells and bewildered looks, ‘the world did not end’, as the video points out. It has already attracted more than 60,000 views.

“The Dolmio pepper hacker might not be available to every household yet but we believe that our experiment perfectly shows that once you disconnect from your technology at the dinner table you can really connect as a family,” Stear said.

Through a survey commissioned by Dolmio, results showed the average Australian household had 12 gadgets or devices, and TVs, smartphones and tablets were the biggest distractions to family members. Parents revealed some children would skip dinner or dessert to spend more time on their devices. And 69% of Aussie households have witnessed an argument as a result of having technology at the dinner table.

The survey also revealed that though most parents believe gadgets and devices should be banned at the table, but some parents do check their own phones, or let their children use technology to keep them happy.