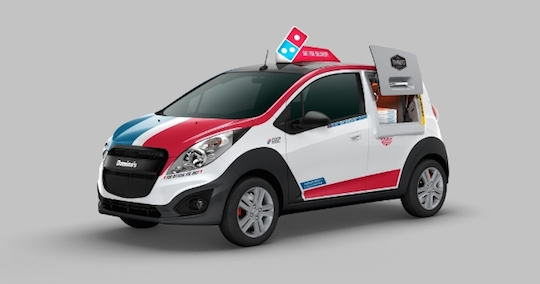 An international crowdsourcing design competition has resulted in the launch of a purpose-built pizza-delivery vehicle, in the latest marketing stunt by US chain Domino’s Pizza.

The car features an illuminated warming oven behind the driver’s door, storage areas designed for easy loading and unloading of pizzas from outside the vehicle, and a ‘puddle light’ that projects the Domino’s logo on the ground.

All seats but the driver’s have been removed, allowing the car to hold up to 80 pizzas. The interior of the car includes non-slip storage surfaces to stabilise items during delivery.

The DXP’s base vehicle, the Chevrolet Spark, was a 2015 Top Safety Pick in the minicar segment, and gets around 7.2 litres per hundred kilometres.

The design and production of the DXP took more than three years. The company says it was born out of Domino’s passion for innovation.

“The Domino’s DXP is the first purpose-built vehicle aimed at revolutionising pizza delivery,” says Russell Weiner, president of Domino’s USA. “This innovation allows drivers to do their jobs with greater ease and efficiency, and demonstrates that Domino’s is absolutely fanatical about making perfect deliveries.”

Domino’s is working with Roush Enterprises to convert and deliver 100 DXPs to 25 markets across the US. Domino’s has even contracted with Chevrolet dealers in the cities where DXP vehicles are being launched in order to deal with the DXP’s custom features.

With the launch of the cars, the brand is holding a competition where people spotting DXP vehicles can share their sighting via social media using the hashtag #DXP, centred around campaign site dominosdxp.com, created by Domino’s agency CP+B.

“Even though Domino’s deliveries will still primarily be made in the personal cars of delivery drivers,” says Weiner, “the Domino’s DXP represents an innovative leap into the 21st century and takes delivery to a new level of efficiency and quality.”