Online share trading site E*TRADE Australia emerged post-GFC into a flat market in 2010. The marketing team realised that a brand refresh was in order, which included a renewed campaign for online customer acquisition.

The business had seen a dramatic drop in new leads coming from the online channels, including search and display. As part of the refresh E*TRADE asked its online marketing agency, dgm Australia, to review the target audience segmentation. It was revealed that the ‘mums and dads’ approach was alienating the brand’s active users.

The decision was made to refine the audience segments to target both active users and people new to investing. This was combined with a more targeted pay-per-click (PPC) campaign that was to kick-start with the brand relaunch in November 2010.

Online customer acquisition is a central strategy for E*TRADE, and the new campaign had to build the numbers back to pre-GFC volumes. The keywords in the PPC campaign also had to reflect the new audience segmentation strategy.

In addition, the campaign had to take into account the competition from other players such as CommSec, Westpac and NAB, which were all facing the same market conditions.

The E*TRADE marketing team refined their target audiences to better reflect the segments that new customers were coming from, and instructed dgm to adjust the PPC strategy to align with the new targets.

The new target segments were ‘active online investors’, ‘dormant investors (no trading for 12 months)’ and ‘non-share owners who intend to buy shares’.

While the client had previously bid on non-brand keywords on an ad hoc basis, the new strategy was to use aggressive bidding on these keywords. The keywords were identified as giving the client the ability to dominate its competitors.

To coincide with the brand relaunch in November 2010, dgm commenced a program of new copy and keyword testing to establish a baseline for the campaign, to determine the necessary budget, and to allow for continual optimisation of the campaign.

The tests outperformed expectations and encouraged the client to increase the budget for the PPC campaign. 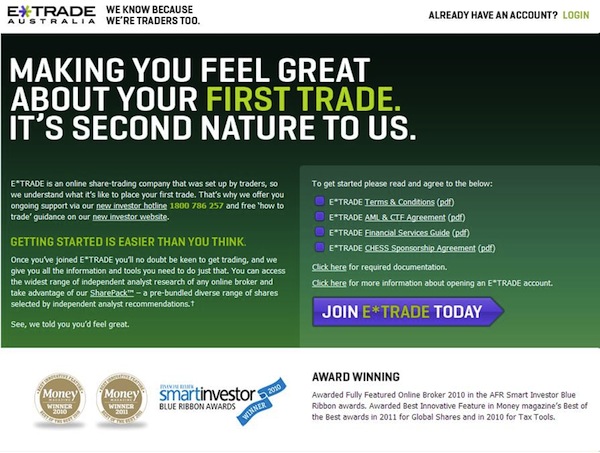 dgm worked with E*TRADE on specially developed landing pages that were designed to take the PPC activity a step further – from the search engine sites onto the client’s website.

The agency recommended a range of different landing pages with each one featuring copy and other elements to align directly with the search terms. Two main target audiences were identified for the landing pages – active traders and new traders.

Seven different landing pages were created with headlines, price information, awards won by E*TRADE (the inclusion of awards has been demonstrated to increase consumer trust in the brand), the company’s new offer, and a prominent call-to-action button. Each page used the same language and search terms that the user input into the search engine.

With the baseline results of the November 2010 testing phase as the starting point, dgm devised a three-part campaign of expanding and refining keywords. This process of continual optimisation of keywords took place in January/February 2011, April/May 2011 and July/August 2011.

The keyword expansion and refinement process was designed to reflect the new target audiences. Refinement was based on isolating the high-converting search queries. It’s important to note that the optimisation was focused on search queries, not keywords, which means it was based on users’ behaviour, what they are inputting into the search query box, to convert. This isolation allowed the agency to use specific, highly optimised copy in the campaign. 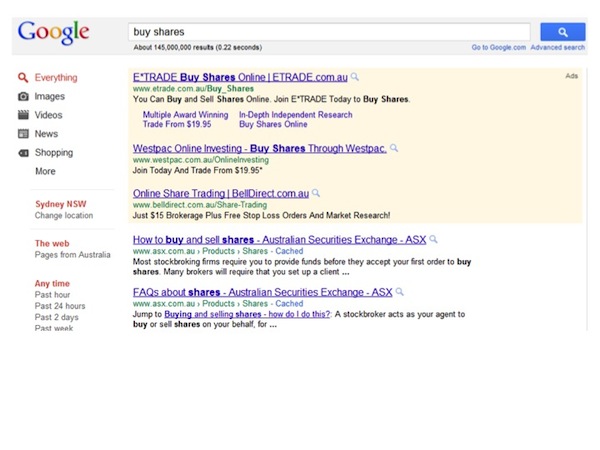 Throughout the campaign period, the keyword list was refined with up to 10,000 negative keywords added to control to which search queries the ad was served.

New ad copy was applied to emphasise the new brand messaging and to respond to the searcher’s intent. This helped to drive customer self-segmentation according to the new target audiences.

Site links were optimised to focus on the client’s core strengths. All new creative was tested and refined, and the structure of the campaign was continually revised to ensure relevant copy was served to each ad group.

This process was helpful when the client was determining the budget allocation as well as reporting on the campaign.

The copy was tailored to landing pages for ‘About the Markets’, ‘Beginner to Pro’, ‘Buy Shares Online’ and ‘First Trade’.

While the world was slowly recovering from the GFC, the E*TRADE brand refresh and new customer acquisition strategies exceeded targets both in terms of new customers to the service and a significant reduction in cost to acquire those customers.

The key results were:

Graphs: Improvement in CPA year on year. CPA improved by 29% despite spend increasing by 35%.

A key challenge arose in March/April 2011, in the form of some aggressive paid search activity from leading competitors such as CommSec, Westpac and NAB.

The effect of the competition was a period of higher cost for E*TRADE, in cost-per-clicks and thus CPA. The agency responded to this competition with creative changes to include more aggressive and stronger calls to action which allowed the client to achieve higher click-through rates.

The conversion rate was almost 50% above targets, and the CPA was 14% better than the target. The PPC channel outperformed other channels, including online display advertising, and was the key channel that helped the client buck the trend in a flat market.

Matthew Loughnan, head of retail at E*TRADE Australia, said, “E*TRADE executed a brand relaunch in November 2010. Our online agency, dgm, integrated the new brand with our existing paid search campaign and showed excellence in understanding our marketing objectives. Off the back of this launch, our paid search campaign has delivered results above and beyond the targets we had set at the beginning of our financial year and are continuing to improve in a flat market.”