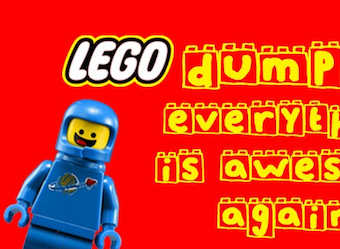 Lego has reluctantly agreed to cease its partnership with Shell in response to Greenpeace attacking with its ‘Save the Arctic’ campaign.

Greenpeace launched its campaign in July this year with a series of Lego characters staging mini-protests around the UK holding banners saying ‘Save the Arctic’ and ‘Block Shell’.

The global lobby group’s ultimate aim is to stop Shell from drilling for oil in the Arctic, which it says is damaging to the environment.

“Sea ice in the far north is melting, but rather than see this as a warning sign, Shell sees it as an opportunity to drill for more of the oil that caused the melt in the first place,” Greenpeace said.

READ: ‘Everything is NOT awesome’: Greenpeace attacks Shell through Lego brand partnership

Lego to end the partnership

Last week, Lego Group CEO Jorden Vig Knudstorp conveyed his irritation in a statement that included the announcement that Lego will not renew its co-promotion contract with Shell when the current one ends. The current partnership has been in place since 2011 and includes a promotional line of car toys sold at petrol stations globally.

“The Greenpeace campaign uses the LEGO brand to target Shell. As we have stated before, we firmly believe Greenpeace ought to have a direct conversation with Shell.The LEGO brand, and everyone who enjoys creative play, should never have become part of Greenpeace’s dispute with Shell,” Knudstorp said.

“We do not agree with the tactics used by Greenpeace that may have created misunderstandings among our stakeholders about the way we operate; and we want to ensure that our attention is not diverted from our commitment to delivering creative and inspiring play experiences.”

In August, Shell submitted to the US administration plans for more oil drilling in the Arctic next year.

“It desperately needs partners like Lego to help give it respectability and repair the major brand damage it suffered after its last Arctic misadventure,” he said.

“The tide is turning for these fossil fuel dinosaurs that see the melting Arctic as ripe for exploitation rather than protection. The message should be clear; your outdated, climate wrecking practices are no longer socially acceptable, and you need to keep away from the Arctic or face being ostracised by society.”

Previous Article
BRW Most Innovative Companies: Xero, M&C Saatchi and Planet Innovation in top 3
Next Article
One make or break skill every marketer should have