Sales of digital newspaper subscriptions have stalled for Fairfax papers the Sydney Morning Herald (SMH) and The Age, but the troubled publisher outperformed rival News Ltd for digital sales in the first release of figures from behind The Australian‘s pay walls.

Subscriptions to the digital edition of the Sydney-based paper numbered 56,599 during the week and 56,113* on Saturdays over the current period, well above The Australian which sold 31,241 passes to its pay-walled premium content during the week and 31,381 on the weekends.

The Age fared better, growing its digital subscribers by around 8000 to 31,502 during the week and by around 6000 to 31,894 on Saturdays, but also fell well below the growth it achieved in the previous quarter.

Print circulation for these three leading titles – of which only The Australian will remain in broadsheet format once Fairfax moves to tabloid – continued to suffer the greatest declines, dropping by 12.2% to 13.1% year on year during for the quarter. The print decline was again more marked for the SMH and The Age than for The Australian.

Despite their continual decline, CEO of The Newspaper Works, Tony Hale says printed newspapers have a solid future ahead, with around 18 million copies still sold every week. Overall sales of Monday to Saturday national, metro and regional print newspapers declined by 5.9% in the July to September quarter, a figure consistent with the previous period.

Pointing to the multi-screen approach being adopted by publishers, Hale calls the current figures “the tip of the iceberg as the whole industry begins to report total sales across all publishing platforms”.

Roy Morgan Research supplements the ABC’s circulation data with readership data that produces a combined digital-print unique audience measure. In the second release of these figures, the SMH again topped the charts, attracting an average of 3.2 million readers per week over the quarter, ahead of the Herald Sun on 2.9 million, the Daily Telegraph on 2.5 million and The Age on 2.4 million. The Australian attracted a total combined audience of 1.8 million. 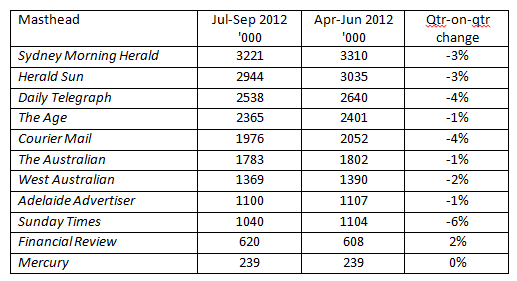 In response to Roy Morgan’s findings, CEO of News Ltd, Kim Williams, took a swipe at the researcher’s methodology and reiterated that an alternative measure will be launched by The Readership Works, which will sit alongside The Newspaper Works from the first half of next year.

“Roy Morgan’s readership data released [yesterday] is out of kilter with the ABC circulation data,” Williams says. “The discrepancies between circulation and readership illustrate the problems in the Morgan methodology.”

Hale agrees, citing a combined average daily sales of digital editions of The Australian, the SMH, and The Age of 120,000 during the quarter, as proof that people in Australia will pay for quality journalism in both print and digital formats.

Circulation data from the ABC and readership data from Roy Morgan is shown for each of the major mastheads below.

Circulation of national newspapers dropped by 5.3% overall year on year.

Circulation of metropolitan newspapers dropped by 5.4% to 7.5% year on year across the week.

*The audited numbers are a daily average across July-September.