Fairfax Media is streaming more than three times the amount of videos as its rival News Limited is through its Australian sites, but Microsoft-owned ninemsn leads the market as the most prolific video site.

News Ltd’s only site in the top 10 video streaming sites for the news category – news.com.au – ranked seventh with 0.9 million streams and an audience of 0.3 million. 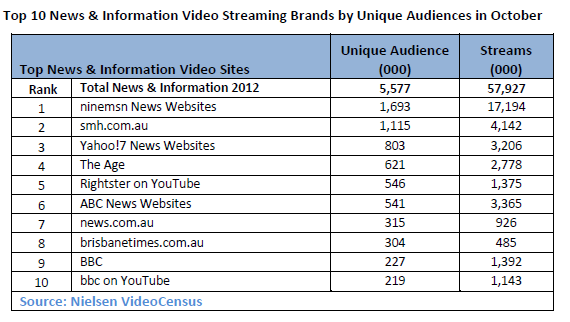 Entertainment focussed sites dominated the landscape, reaching 92% of video streamers, to the benefit of Google and VEVO which came in as the top parent companies for number of streams. YouTube accounted for the bulk of activity throughout the month, with over 10.9 million Australians viewing more than 1.4 billion streams.

By comparison, sites in the news and information category reached 47% of all Australians viewing online video content, reaching an audience of 11.9 million and serving almost 2 billion steams. 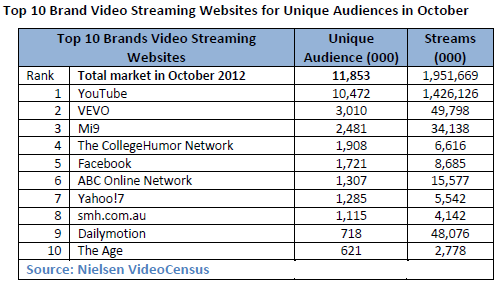 CEO of Australia’s Interactive Advertising Bureau, Paul Fisher, says video advertising represents 10% of the Australian online display market and is growing at a rapid rate. “The IAB supports the introduction of online video specific audience data to help furnish the industry with audience consumption trends and information that agencies and clients can use to optimise their digital media spend.”