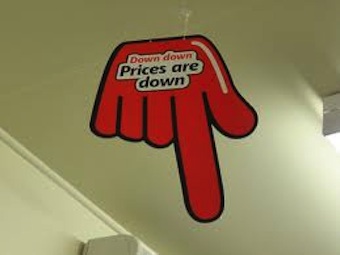 New survey results from Roy Morgan Research have highlighted that the gap between the supermarket’s fight for the ‘lowest prices’ title is closing, with half of  customers surveyed believing Coles has the lowest prices –  just two points ahead of Woolworths.

However, Aldi is still associated with low prices in the industry, with around nine in 10 of its customers saying the supermarket ‘has low prices’.

The last five years have seen the price wars between Coles and Woolworths heat up, with a huge focus placed on price. Coles in particular has fixated on price, with its big red finger and Curtis Stone’s $10 family meals.

From 2009 to the start of 2012, the proportion of Coles’ customers who said it has low prices jumped from around 1 in 3 to 1 in 2, while Woolworths hovered just over 40%. However in the last year Coles has fallen back and the rivals are now again almost on par.

Norman Morris, industry communications director, Roy Morgan Research, says, “Despite the strong five-year gains overall, still less than half of each supermarket’s customers associate it with low prices. The successful Coles ‘Down Down’ campaign that has aired for three years, would have played a considerable part in moving low price perception upwards among their customers, and been the point of difference that allowed Coles to pull ahead of Woolworths for cut-through of low prices.

“But perhaps the effectiveness of the ‘Down Down’ campaign has come to an end, with consumers tuning out the message after years of exposure: the latest March 2013 results reveal there is once again only a small gap between Coles and Woolworths customers, primarily due to a decline shown by Coles rather than any ground made by Woolworths.”