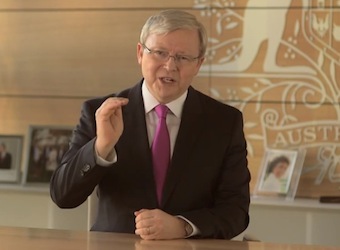 Prime Minister Kevin Rudd has released the first television spot of his current term as federal leader of the Australia Labor Party, in it calling for a raising of the standards of political discourse and a focus on policy.

The ad, titled ‘Raising the Standards,’ opens with Rudd saying, “I believe all Australians are sick and tired of negative politics,” before listing key policy areas and saying that both sides of the parliamentary floor should have a positive plan for Australia’s future.

The ad, below, was released on YouTube prior to its TV run last night, presents a stark contrast to the Coalition spot released at the time of Rudd’s challenge to Julia Gillard last month, named ‘Labor Chaos.’