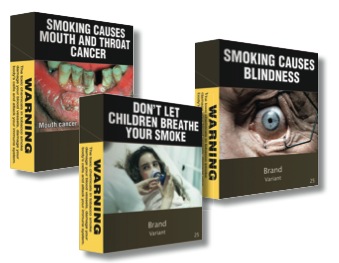 Health Minister Tanya Plibersek has called a last ditch marketing tilt from Imperial Tobacco, which carries the tag line ‘It’s what’s on the inside that counts’ on packaging of its cigarettes, the “ultimate sick joke”.

The campaign seeks to downplay the impact of plain packaging legislation, set to come into effect on 1 December, by telling smokers that the product is still the same and showing the drab brown packaging peeled back to reveal the current branded packaging.

In a statement, Plibersek compared the campaign’s message to what goes on inside the bodies of smokers – diseased lungs, hearts and arteries. “For a company to have produced packs that contain the line, ‘It’s what’s on the inside that counts’, must surely be the ultimate sick joke from Big Tobacco,” she said.

“Smoking related diseases kill 15,000 Australians a year and the Government is determined to reduce the pain and suffering caused by this deadly product.”

A statement from Imperial Tobacco said the interim packets before the plain packaging becomes mandatory in December was to advise “adult smokers” of Peter Stuyvesants brand cigaretts that the brand will soon change colour.

“Essentially, this is a mechanism to provide factual information about upcoming legislative changes to adult consumers of the Peter Stuyvesant brand of cigarettes,” a spokeswoman says. “It is also important to inform our adult consumers that the product itself will remain unchanged.”

Plain packaging will start to arrive in stores from 1 October 2012, with 1 December being the official date for compliance with the ruling. Plibersek said the Government and the ACCC will be monitoring compliance closely.

“We will be closely watching the new packages to ensure that they comply with the regulations because we know that Big Tobacco will use every trick in the book to try and get around the new requirements,” she said.

“Where we identify any examples of possible non-compliance before the implementation dates we will be letting the companies know so they can rectify any issues.”