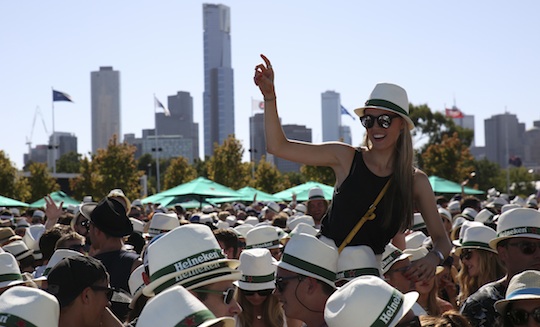 This year’s Australian Open saw Heineken and the event celebrate their 20th year of partnership. Marketing spoke with Alessandro Manunta, marketing manager at Heineken Lion Australia, about the evolution of successful partnerships, and the insights behind Heineken events and features on offer at this year’s Open.

As the Australian Open’s official beer supplier, there’s no escaping the green giant with the red star. As well as keeping the bars exclusively stocked, there are three main areas of activation for the brand centring around the tennis.

In the Grand Slam Oval you’ll find the two-storey Heineken House, to accommodate VIP consumers, trade customers and guests. The House looks out over the Heineken Live Stage. Together these provide a permanent centrepiece during the festival of tennis.

Second, Heineken Saturday takes place on the second Saturday of the tennis, bringing to life what the brand calls the ‘Legendary Experience’ to our consumers. It’s an emotional crescendo, a mini festival of music and entertainment.

The third layer of the partnership takes place in the key venues around Melbourne, making sure bartenders follow the five key steps to serve Heineken in the perfect way, an important act of discipline for a premium brand – but this year it’s been turned into a game in which mystery shoppers reward ‘Star Serves’.

Marketing: It’s the 20th year, too, which is quite a milestone. What’s the secret behind enduring brand partnerships like this?

Alessandro Manunta: There’s really no secret. There are common objectives, which we’ve amassed in 10 years. The things that we have in common is that the Australian Open is an international event, and Heineken is an international brand. At the same time, the Australian Open promote themselves as a premium event, and that fits in well with Heineken, too. Also, there is the fact that it’s more than a sport. Yes, it’s tennis, but it’s also all the other things. And it’s the same for us. They have to choose partners which work with tennis. It’s not that our main priority is to connect the brand with tennis, it’s more about providing a great experience to our fans and to the tennis fans that are out there.

M: What’s the idea behind the mystery shoppers?

A: It’s something we started because we wanted to change the rules of mystery shoppers. Shopping is quite common as an exercise between arc brands. In the past it was about checking what was not being done correctly and then fix it. While the angle that we’re taking it is more about rewarding the correct behavior.

What we’re doing essentially fits well with training all of our key venues. We have a new team we’ve trained. We send them to Amsterdam for a week training, and then we use them to train all the venues. Then once they have been trained in the perfect serving of Heineken, we started sending our ‘Star Serve Guru’ around Melbourne, who goes in there asking for a Heineken, and filming them without knowing that they’re being filmed.

And in the moment that they are serving him a Heineken, he leaves them a fantastic tip, which has been so far tickets to great tennis matches. The reason we do that is we want to create a positive buzz within the trade and within the staff. They are the first ones who show that Heineken is served in the way it should be served, and they talk about it in a positive way.

M: Can give you give any indication of the success of this year? Firstly, in terms of attendance. Is it too early to talk about results this year?

The key priority for us at the Australian Open is a consumer engagement platform. Priority number two is a customer engagement platform. We also host over a hundred customers from around Australia. The Heineken Saturday, which is the key event where trilby hats (pictured) are being shared with the fans, and seeing that everyone is wearing them, seeing that there is people running just to try to get into the big garden.

That is for us always going to be the best sign this has been a success. It’s the same from a customer perspective, seeing them high fiving on the Heineken house, and coming and asking us ‘alright what’s going to be next, how can we support your brand?’ That is the best way for us to see if it has been a successful or not. I think this year for us has been one of the most successful.

M: Is there a way to measure it? You could, I suppose, count the number of high fives and hats being worn, but what are the KPIs?

A: In previous years what I was always trying to look at proving was that the people there were absolutely engaged. The show has always been a success, and has been this year, but it’s always important that you try to ensure the people who aren’t there can experience a little bit of what people are living when they are at the Heineken Saturday or the Australian Open. Something that we’ve done much better this year, and we have been working with Red [Agency], has been working with key opinion leaders and inviting them to the tennis and ensuring that they were engaged. And ensuring that they were posting their experience and they were sharing what they were doing there. The reach of some of the posts that we’ve seen has been amazing. We had Sam and Sasha from the Bachelorette, they posted something about the day that had 13,000 likes. The same photo we posted to Instagram and had 100 likes. So that’s what you consider the big added value of inviting [key] people.

M: So getting the most out of a sponsorship is really about the other marketing techniques that are brought into it such as celebrity endorsement. Has this evolved over 20 years? Has there been a big change?

A: The partnership has evolved a lot over the 20 years. In the past, Heineken was the naming sponsor. And the objective there for the brand was different. Heineken was not a new brand in the market, but definitely driving awareness was much more important to what it is for us today. Right now Heineken has got some of the highest brand awareness across all brands in Australia. Building that was the aim for the partnership early on.

That’s why the partnership has evolved over time, we went from being one of the naming sponsors to the official beer supplier because the point was no longer just saying, ‘Hey, Heineken is there’. The most important part now is about driving those consumer engagement platforms such as the Heineken Saturday, which are the ones that are going to build local relevance for the brand in Australia.

To give you an example, I was taking a look in some of our folders from the past partnership at the tennis, and I found this photo of the Heineken Saturday. At that point in time I could really see the transition of the partnership. This photo of the Heineken Saturday as it used to be, was in 2006 or 2007. It used to be just a marquee, with a guy and a guitar. Since then, these are the things that have changed a lot.

For tennis in Australia, the event has evolved into a festival of tennis. I think at that point in time we centered just around the sport. The sport is still the hero, but it’s [now] the frame around it that makes it special and that’s where brands like Heineken can contribute and make it special.

Previous Article
Lego, Barbie making big moves towards inclusivity
Next Article
A must-read for those getting started with marketing automation