Advertisers have become too used to seeing outdoor media as an effective way for mass advertising, says Sérgio Brodsky, but what if we could see it as native content for cities?

In behavioural economics ‘functional fixedness’ is a cognitive bias that limits a person from considering something beyond the way it’s been traditionally used, causing a ‘mental block’ against thinking differently when solving problems.

For example, the people on the Titanic overlooked the possibility that doors, tabletops, tyre inserts and even maybe the iceberg (yes, ice floats on water!) could have been their lifeboats. Fixated on the fact that only actual lifeboats could be their transport to safety, people overlooked the size and shape of different objects that could play the same role but in different ways.

When it comes to innovation, businesses are constantly hampered by functional fixedness and other cognitive biases that cause people to overlook elegant solutions hidden in plain sight. As creative as we are as an industry, advertisers have become too used to seeing outdoor media as an effective way for mass advertising. This is certainly the case, but what if we could see outdoor media as native content for cities?

And, what if the vast network of billboards, street furniture and panels could actually help alleviate the problems cities face and this way enable new revenue models? Do I have your attention now?!

Although cities only occupy 2% of the earth’s landmass, they are where 75% of resource consumption and the majority of brand communications are concentrated. Due to increased demand for ever more comfortable lifestyles, the existing urban infrastructures have been feeling their ‘growing pains’ for decades now. From energy to education, health, waste-management or safety, cities’ services are struggling to keep up with their larger, older and ‘hungrier’ populations.

Moreover, our global media and advertising footprint also comes with a hefty environmental toll. In the UK, for instance, advertising is responsible for two million tonnes of carbon dioxide emissions annually, equivalent to heating 50% of London’s social housing.

According to recent research led by Diana Ivanova from the Norwegian University of Science and Technology, only around 20% of emissions for which we are individually responsible comes from direct usage, such as driving a car or having a shower.

The rest is all hidden in the supply chains of what we buy. And between production and purchase lies promotion, the last frontier in terms of redesigning our economy from linear to circular.

To take the leap we must drop the functional fixedness in which we’ve been conditioned to believe by using brands’ touch points as more than mere messengers to supplementing public utility services and minimising carbon dioxide emissions.

Such logic is able to turn advertising into a regenerative force for cities, where the promotion of goods and services is not only more profitable, but also environmentally enriching and socially virtuous.

I have coined this Urban Brand-Utility (UBU), an approach that can meaningfully reconnect advertisers with people and the public and private sectors. For example, according to the World Health Organisation, 80 percent of global urban dwellers breathe bad air – increasing mortality rates, structural unemployment and greatly compromising our overall well-being.

The cost of addressing the problem amounts to millions of dollars and we are still far from solving it. Importantly, the main cause of pollution is rapid industrialisation, which, in turn, is driven by urbanisation.

In 2014, following a construction boom in Peru, Lima’s University of Technology (UTEC) deployed air-purifying billboards, each claiming to be as effective as 1200 trees and occupying a much smaller area. In Manila, Coca-Cola created a billboard made up of 3600 Fukien tea plants, which combined removed almost nearly 23,000 kilograms (50,000 pounds) of carbon dioxide in a year.

At the University of Sheffield in the UK, a billboard coated with microscopic particles of titanium dioxide can now eradicate the equivalent to the pollution created by about 20 cars every day. It costs £100 (AU$180.75) to coat a standard billboard with the benefit of turning advertisements into catalysts in more ways than one.

The above (and several other similar campaigns that preceded and followed), however, were all one-off activations. Those are great for consumer awareness and advertising award entries, but short-sighted in terms of embracing a bigger commercial opportunity while addressing society’s most pressing issues.

Much more is required to create a reliable network of creative urban resilience. But according to the 2015 World Economic Forum’s Global Agenda Council on the Future of Cities: “Cities will always need large infrastructure projects, but sometimes small-scale infrastructure can also have a big impact on an urban area.”

Towards a network of creative urban resilience

To do good, we must also do well. Advertising is the soul of the capitalist system and the best incentive to upgrading it is by creating new revenue streams. For one, a brand that shows itself relevant and useful is more likely to cut through the noise and increase sales. But there’s also a bigger commercial model to be explored. First, by definition, UBU programs have three core objectives:

Here’s a hypothetical situation. Let’s assume that UTEC’s air-purifying billboard was able to generate a $10 million surplus to the city of Lima by minimising the costs from dealing with air pollution. Rather than treating this as a one-off campaign, smart mayors would try and create a virtuous cycle, where 50% of the surplus is retained by the city, 25% is returned to the advertiser and 25% to the agency and media owner – a value only unlocked by repeating the approach. The more advertisers communicate their messages in a way that benefits brand, people and city, the cheaper it becomes to do more of it. And, the more cities encourage such an approach the faster societal problems would be addressed. In other words, UBU programs become a catalyst, igniting brand love, smartening cities and improving their economies, as shown on the model below. 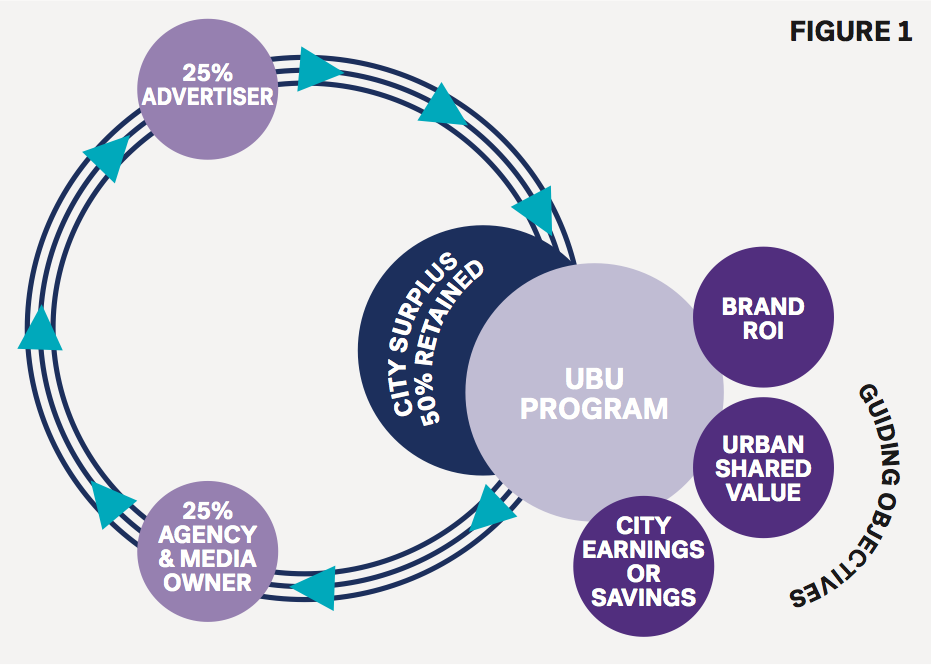 As with the idea of a circular economy where products and services go beyond an end user’s finite life-cycle, UBU looks at brand communications as closed loops by designing a system bigger than fixed campaign periods, target audiences and business-as-usual KPIs. This way, marketing budgets are effectively turned into investment funds with returns in the form of brand cut-through, happier customers, social impact and more effective city management.

With one billion people migrating to cities by 2030, a billion-dollar opportunity is emerging for pioneering marketers to make an impact that goes beyond their target audiences and brands’ bottom lines. The University of Melbourne has already confirmed that the impact assessment of UBU programs is possible and would inform new revenue models and policy-making efforts.

Dr Savvas Verdis, infrastructure economist at Siemens and Senior Research Fellow at LSE Cities at the London School of Economics, is equally convinced: “I am sure that Urban Brand-Utility will provide some much needed expertise and transformation [in the brand communications industry] and particularly in generating new business opportunities for infrastructure, development, tech companies and others tendering with cities through an innovative use of media.”

In this more useful and integrated new world, agencies and their clients would partner with cities and media-owners via open data platforms, matching brands with specific urban challenges and forming the foundations of a network of creative, urban resilience.

Radically innovative skills and propositions would emerge from the frictions between marketers and creatives working closer to urban planners, policy-makers, landscape architects and many others. Interestingly, in September 2016, the City of Gainesville, Florida in the US and design firm IDEO co-created the Department of Doing, aiming at creating a more competitive economy and becoming more citizen-responsive.

To make the model scalable, however, a digitised mechanism – as opposed to IDEO’s ‘private-public bureau’ – would be required. An interesting case of civic engagement enabled by outdoor media has recently gone live in New York City.

The Participatory Budgeting campaign invited New Yorkers to decide how to spend US$1 million of the public budget through digital panels spread across the city. This means that the same touch point used to communicate is also used to enable the action it asks audiences to undertake – a paradigm shift where advertising can finally walk its talk.

Besides supplementing New York’s broadband network and now enhancing civic life, the LinkNYC totems have projected an incremental US$500 million in ad revenue for the city as part of a 12-year contract, by unlocking new value from underutilised assets.

Just like the Ancient Greek public squares – the agoras – where direct democracy was born, this emerging participatory media can effectively collect complaints and suggestions for cities’ improvement, in real-time. The next step for this could then be the matching of brands that align with a specific urban challenge. This way, traditional public-private partnerships are flipped on their heads.

Instead of top-down municipal contracts, issues are identified by local constituents informing future UBU programs, as wanted by the people and enabled by outdoor media.The technology is not yet globally available, but any advertiser wanting to shift brand interactions from interrupting people to enhancing their moments are certainly able to game-change from business-as-usual to the deployment of temporary branded utilities and, ultimately, implement longer-term (18 months or more) UBU programs.

This can be done by following six strategic imperatives:

In this ‘Brand City’ construct, consumers are ‘emancipated’ as citizens with every purchase effectively counting as a vote, electing the most useful brands and respective media deployment as a more integral part of their individual and communal lives. Importantly, this new model allows brands to connect with people in a more meaningful way and cut through the clutter that is suffocating the industry.

Media and advertising have powered a linear economy that is now facing severe challenges. The strategic opportunity is to bend the line and turn the existing infrastructure into new utilities that benefit all parties involved and educates everyone in the value-chain. Markets, choice and competition are not just a consumer’s best friend, but their civic representation.

As reported by numerous sources, the general population does want brands to be more civically engaged; however, the difference between ‘expressing’ your brand and ‘taking action’ through it is that the latter can effectively make a difference for media owner, agency, advertiser, city and, ultimately, its residents. After all, as one of the tribunes asks the crowd in Shakespeare’s Coriolanus: “What is the city but the people?”