Technology often doesn’t do what we want it to do and when it fails we are always quick to point fingers. Dynatrace, senior director, Dave Anderson uses his anecdotal experience to teach us to stay calm and take the appropriate steps to get a website performing like it should.

I got a phone call yesterday from an old colleague of mine who was having some major website performance issues.  She is now working as a digital marketing manager at a global employment resourcing firm and to say she was frantic is an understatement.

The conversation went like this:
“Dave I need help. Our website has been hacked continuously, it’s gone down twice and both times for extended periods. It’s a major cluster [obscenity] because our contractors can’t submit time sheets, so everything is being done manually and everyone is pointing fingers at me!”

“I think I need to change my hosting provider. Can you recommend a good one? Someone that can do all the plugin updates and take care of security?”

Website goes down, so immediately it’s the hosting provider’s fault.  Not an uncommon reaction, but not necessarily the right one.

My suggestion, rather than knee jerk and shift the site to another provider, which potentially will result in the same problems rearing their head, was to audit the current site.

I quickly performed some website monitoring tests, which anyone can do easily, to baseline website performance and specifically tell me:

– Response time and availability,
– variance in performance (i.e is response time fluctuating or is it consistent?), and
– if there is an issue, what is causing the issue? (i.e. a third party host plugin, image sizes, failing objects.

Specifically, I looked at the following:

– Homepage,
– another landing page (i wanted to understand whether it was a site-wide issue or an isolated page issue),
– competitor homepage (it’s important to benchmark your site continually, irrespective of whether you’re having problems with your website performance or not), and
– their global site (this is another way to benchmark performance against a relevant metric).
This image shows response time for the homepage, campaign page, the global site and competition. Response times on average were very high and you can also see huge spikes in performance.

In the space of 12 hours I was able to see the problem pretty clearly:
1) My friend’s homepage was averaging 16 seconds load time. (Ouch.)
2) A major outage occurred at 10pm for at least an hour.

So, what caused the outage? Interestingly but not surprisingly it looked like it was caused by a third party plugin. Not the primary hosting provider.  Specifically this was www.dynamicpress.kei.pl, which is the theme provider’s URL. Why it’s causing a delay, I’d need to investigate further.

Drill down into your data and find out what is causing speed issue and outages. This graph shows a third party plugin is the major cause of delay in site load. 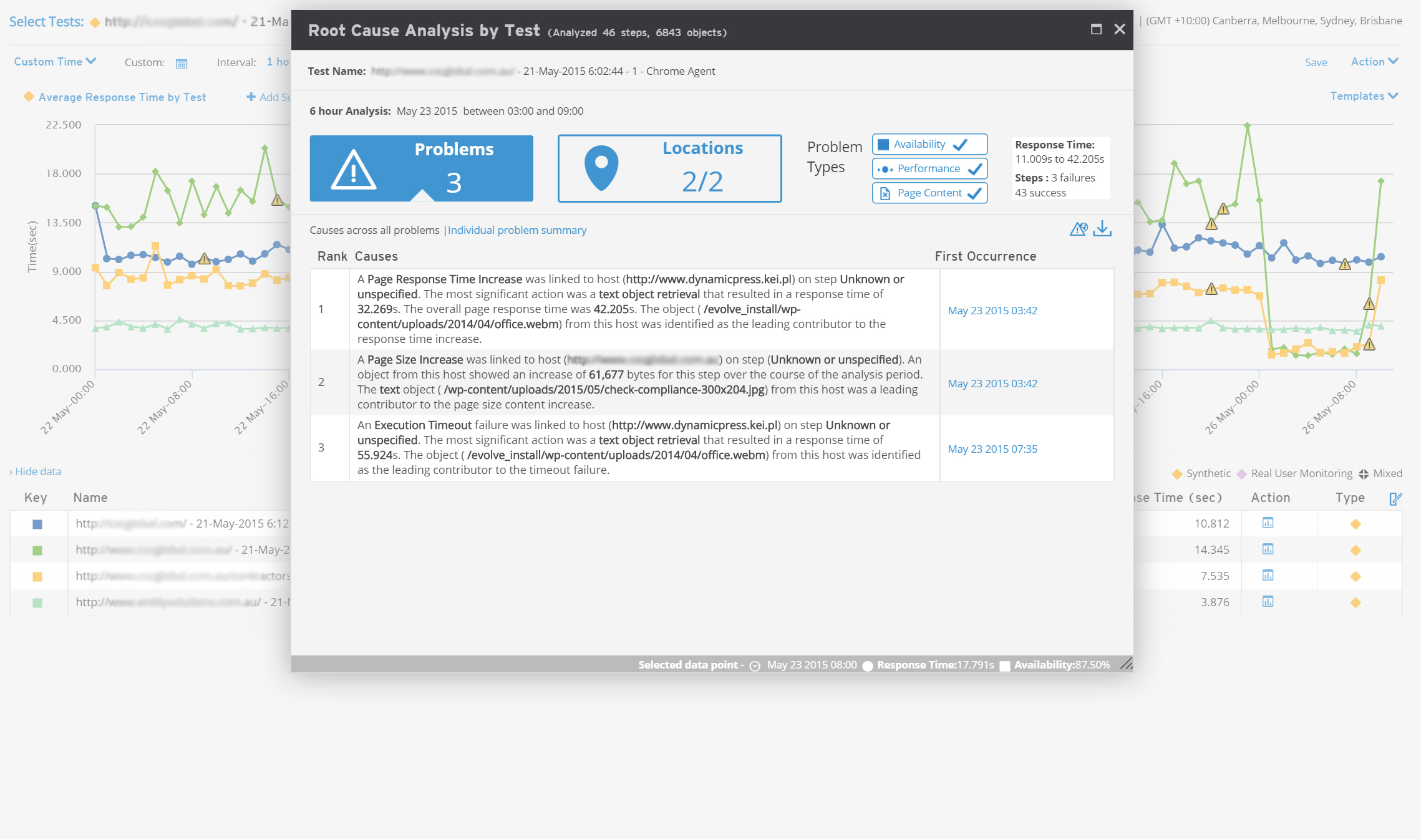 It’s not uncommon for a site to have performance issues relating to a third party host. For example, on average, Australian retailers have 34 hosts on a site. Each host has to make a connection to an external data centre, grab content, and return.  This connection time can cause huge delays in how an entire site loads. However, most marketers automatically make the assumption that it’s their hosting provider that’s causing the delay, rather than a component within their site.

I was also able to look at the object over a period of time to see just how troublesome it was being to the overall site. The connection www.dynamicpress.kei.pl was adding significant time to the overall site response time, on average the site was taking longer than 10 seconds to load. No wonder my friend was tearing her hair out.

We can then see what the impact of the third party plugin is over time, using the object trending analysis.

But where to from here? In a short time I was able to draw some conclusions that pinpointed the issue and got her well on the way to a resolution. The main learnings were:

– The site is poorly constructed and has ongoing response time issues.  Any site that is loading beyond five seconds requires optimisation otherwise you face high abandonment rates and user complaints.

– The main problems appear to be third party plugins, which my friend can now isolate and dissect to understand clearly which ones need to be optimised, better built, or removed altogether.

– Don’t make assumptions when there is data available that can pinpoint exact problems. Keep hosting providers and developers accountable for service level agreements. It’s too easy for people to play the ‘blame game’ and point fingers at marketers who are not necessarily technical.  It’s important to remember that the website is the most critical digital asset a marketer has, so it’s vital to invest in a monitoring solution that provides the data, and makes it easy for you to interpret and respond to analysis.
– Performance monitoring helps you understand what the performance issues are so you can make informed decisions that will actually solve the problem.

– Set benchmarks for how you want your website to perform day in, day out. The average Australian retail load time is 5.9 seconds so use data like this to keep your marketing team and your developers engaged and constantly monitoring performance. As soon as data starts to slip you will then know you have a problem creeping up on you.

Dave Anderson works with digital, marketing and IT teams of some of the biggest airlines, telcos, retailers and government organisations. His daily existence centres on digital performance and includes data extraction, analysis, education and forecasts that allow organisations to work faster and smarter. Not only is he responsible for the growth and success of digital and application performance giant Dynatrace in APAC, he’s also the company’s global director of social and community strategy.