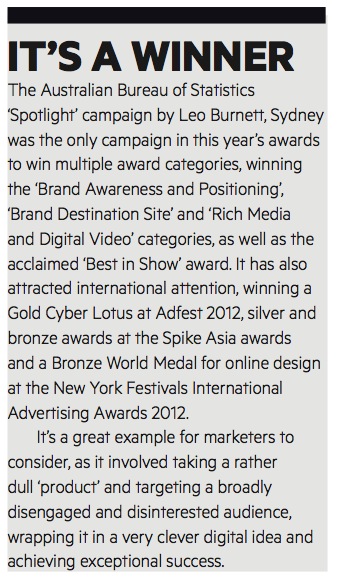 The Australian Bureau of Statistics (ABS) carries out a national Census every five years. The data that it collects is critical in guiding future decisions pertaining to education, healthcare, transport and the environment. It therefore needs to collect as much and as accurate data as it is able to in order to make a real difference when it comes to shaping future government decisions that affect each and every Australian.

The ABS realised that many citizens saw the Census as little more than an irritating obligation affecting participation rates and consequently the quality of the data. This was particularly noticeable among Gen Y, who not only shared the general population’s apathy, but more worryingly were choosing not to participate at all. One of the biggest problems was that people didn’t understand how the data collected by the Census relates to and affects their own lives.

The ABS wanted a solution that would demonstrate to the general population, but specifically targeted at Gen Y, that the Census is more than just a bureaucratic exercise. The key requirement was for the campaign to illustrate how engaged participation in the Census could have personal benefit to the individual. The goal was to make data feel tangible and relevant to everyone and thereby drive interest in the Census.

As the campaign target was the previously disengaged and largely apathetic Gen Y, it also needed to use both tone of voice and a platform to connect with its main audience and move away from traditional government awareness campaigns.

The idea behind Leo Burnett’s campaign was a simple one. It sought to engage people by showing them how their Census data could influence decisions that would shape their community and the future of Australia.

As with all simple ideas, however, it was the execution that really set the campaign apart. Leo Burnett knew that the target audience had little appetite for more facts and figures about why they should participate in the Census and that they would be difficult to target, especially via traditional means.

So, instead of telling people about the benefits of participation, it chose to create an experience that was tailored for them. This took the form of ‘Spotlight’, a personalised interactive film using existing Census data to create a story about each visitor to the site. This provided an engaging visual illustration as to how the data collected by the Census relates to the individual and how it is used to make a real difference to government decisions that affect their lives. 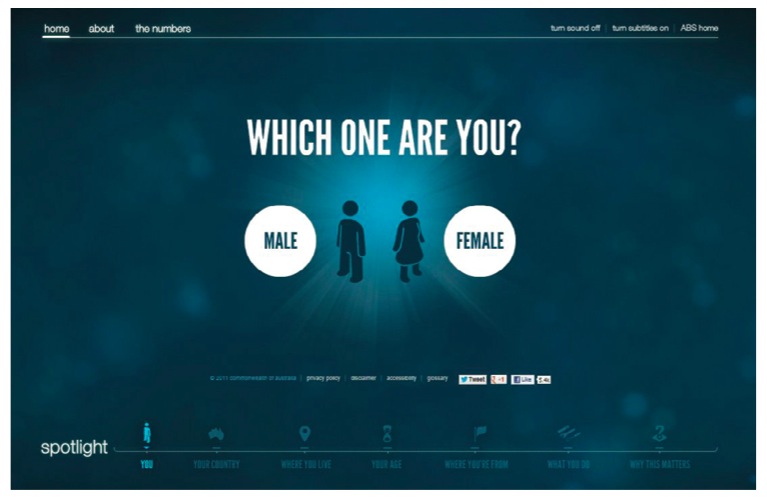 The heart of the campaign was a Spotlight m-site, personalised film and related social media activity. The film uses real data from the 2006 Census to create the highly personalised animated film. Customised infographics within the film tell the story of ‘you’ – depending on the information you provide as to how old you are, what you do, where you live and where you come from. It has 20 different points of customisation, so provides a truly personal and variable experience for each visitor.

In order to drive awareness in the target audience after Spotlight was launched, social media was heavily relied on for building traffic to the site.

Spotlight was seeded with influential bloggers, appropriate sites and on Twitter, as well as through the Census’ own social channels. A bespoke sharing mechanism was built into the site, so that after users completed their Spotlight experience, a unique selfportrait infographic of their Census data was created, which could be shared across Twitter and Facebook, attracting more visitors to the site and building momentum for the campaign.

Key to the success of the campaign was the tone of voice used. It was important to both the client and the successful execution to keep it as far as possible from feeling like a standard government communication. The film was voiced by well-known comedian and TV presenter Shaun Micallef and employed both humour and a touch of edginess to fully engage with its audience. Raw data was presented as more relatable scenarios illustrated with quirky and fun animation.

The experience was also made fully accessible for all users by concurrently developing an alternative version that made the same content available to the highest accessibility standards. 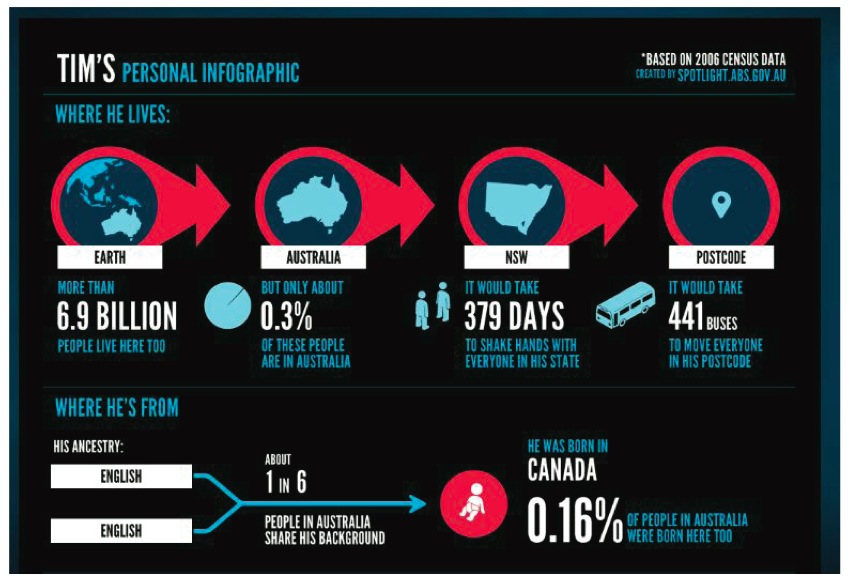 Within weeks, and with no paid media support, the government website about statistical data was visited by more than a quarter of a million people, each spending on average more than four and a half minutes with the content. More than 37,600 personalised infographics were generated and shared online with over 61,500 views and 4500 likes. Although at the time of judging the 2011 Census data itself was yet to be released, more than half of the visitors to the site were from Gen Y, suggesting a much improved level of engagement.

In the Brand Awareness and Positioning category, the way the campaign focused on the experience of the individual and not about the Census itself was admired. As one judge noted it was a, “fantastic way to make a dry subject matter very relevant for the target audience”. The traction to the site and engagement with it on the back of little or no media spend was also lauded.

Tags:
Previous Article
Facebook turns its attention to social search, says Zuckerberg
Next Article
At the speed of marketing: making the right decisions in real time