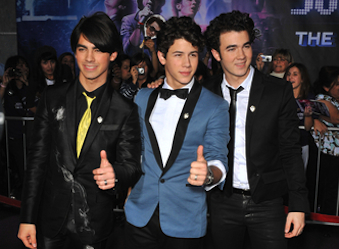 Someone at Ad:tech New York thought it a wise idea to get Kevin Jonas, of teen pop group, The Jonas Brothers, to close the two day digital conference with his advice on reaching out to the ‘Millenial’ cohort. This coincided just days after the band announced they were to go their separate ways.

In a conversational interview with Sean Finnegan, CEO of The C4 Group, a digital consultancy in New York, he comically opened up by saying he was at Ad:techNY ‘in search of a job’.  Although the skepticism in the room was palpable, the tech-savvy father of one divulged his pearls of wisdom on millenials and how to successfully cut through in the fast-changing social media environment. Defining a millennial as a person reaching young adulthood around the year 2000, in other words, they are Generation Yer’s. Proving his social media mettle in real time, Jonas announced at the end of the interview his tweeted picture of the Ad:tech audience had gathered a whimsical 11,000 likes.

The first question Finnegan posed to Jonas was how to engage his cohort in an authentic and unique way. Jonas was hard hitting, “the 3 most important things to millennials are: looking good, feeling good and doing good.” Make a place where they can be social, feel special and then sell to them.  Allow them to become the tastemaker, give them ownership and they will support your brand in return.

He said using apps to activate audiences in real time, was immediate, measurable and interactive and therefore highly engaging. The Jonas Brothers grew an app by 150,000 in a week and a half.  After launching the app, the Jonas brothers cut down on other social media. “Why just give away our brand?”, declared Kevin Jonas, “…we also deleted the Jonas Brothers Twitter account because it wasn’t authentic anymore.”  Interestingly, he commented that “our generation doesn’t even feel gratification from posting on social anymore, just obligation. “Consuming media that is largely free increases the competition for millenial’s shortened attention spans”.

Social media is almost too restrictive for the millenial’s attraction to ‘on-demand’ media formats.  “Soon we’ll have complete media freedom”, says Jonas‬. “You’ll see only what you want to see, when you want to see it”.  He believes that photos and videos are the future of social media.

“As a celebrity, it comes down to letting them into your life, not telling them what to buy.”  Could this personalization of social media come to replace traditional product endorsements? Sean Finnegan’s takeaway: In five years millennials will have greater spending power than the Baby Boomers, and they respond to their idols. The moral is, become a celebrity, he says – after witnessing the easy 11000 likes acquired in the duration of the interview at Adtech.

Kevin Jonas advice to marketers: Do something so far out of the box that it feels uncomfortable if you really want to cut through to millenials.