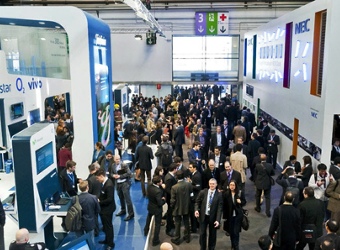 This year over 60,000 people passed through the gates of Barcelona’s Fira exhibition centre to attend the GSM Association’s (GSMA) Mobile World Congress. Some of the Tigerspike team attended and this is our top-level summary of the key trends at this year’s event, and what these trends may mean for your business.

To put some context around the scale of the mobile industry, the opening keynote from Anne Bouverot (Director General, GSMA) told us that worldwide there are currently:

By 2015 we can expect to see 9.5 billion mobile connections worldwide. That is 1.3 phones for every person alive.

Consumers in Japan have been paying for goods and services with their NFC-enabled smartphones for more than two years. We are now beginning to see enough NFC devices enter the market in the remainder of the developed world to indicate that this technology is ready for mass consumer adoption. While it is expected that $50 billion of transactions will take place through NFC enabled phones by 2015, at the moment the average consumer is confused by all the operators, handset manufacturers, banks and payment merchants, who are all launching competing services and want a slice of the value chain. It is our view that joint ventures of a similar scale to America’s ‘Isis’ represent the minimum level of collaboration required from interested parties to enable mass adoption of this technology. We expect many more partnerships to be announced in this space throughout 2012.

The advice for businesses is to watch this market very closely this year. The early adopters of in-store NFC technology have the opportunity to leapfrog their competition by offering customers compelling, location-based offers, delivered through real-time, data-led marketing initiatives. The technology your customers chose to carry in their pockets will determine the mobile platforms to build solutions for and the mobile payment platform to invest in. There are always costs and risks involved when initiating early adopter strategies, make sure to always research your users and develop a strategy to reduce the risk of making the wrong choice.

In 2011 we witnessed the first fourth-generation cellular networks, based on a technology called ‘long term evolution’ (LTE), deployed in major cities around the world. This infrastructure has been in development for some time, and is able to deliver mobile data at speeds similar to the wired connection found in your home only a year ago. It will be at least two years before this level of wireless coverage is as ubiquitous as today’s 3G networks, but the trend is clear: mobile networks are going to be able to deliver richer media experiences to consumers, meaning increased engagement with web sites and apps. Video content will be a big driver of these richer experiences (it is estimated that 80% of all internet traffic will be video by 2016) and this is one reason that we’re developing a new high-speed mobile video transmission technology designed to handle 3D and HD video content across any format, device and platform. For now, the advice to businesses wishing to deliver rich media experiences on smartphones and tablets is to embrace the H.264 video standard and steer away from Flash video.

Windows Phone and BlackBerry are still in the game

Android and iOS currently dominate the smartphone landscape with around 70% of the market of new smartphone sales between them. It is our view that the platform battle is still a four horse race. Nokia recently gave away 25,000 Lumia 800 Windows Phones to developers and RIM is handing out thousands of BlackBerry PlayBook tablets to developers. We expect Windows Phone to continue to grow in popularity, and we wait with anticipation to see what RIM is able to deliver with version 10 of their BlackBerry OS later this year. Windows Phone and BB10 are both likely to achieve a market share of 10%+ in the coming years, meaning that HTML5 web-apps or hybrid apps are likely to be the most cost effective development approach over the long term. The restrictions around user experience – typically inherent with these lowest common denominator approaches to multi-platform development – are slowly (but not entirely) being negated with advances in 4G networks and cloud services. Whether you choose to support one, two or more platforms, an important aspect for businesses to understand is how user engagement differs between smartphone users and tablet users. Businesses need to consider separately their tablet and smartphone strategies, just as they consider separately their web and mobile strategies.

Personal media is about more than just mobile

Personal media encompasses the growing range of personal devices from mobile phones to tablets (like the Apple iPad), portable and home gaming consoles and ebook readers like the Kindle – it is about much more than just mobile. This trend was demonstrated by Ford Motor Company at this year’s Mobile World Congress, who took the unusual step of announcing its new Ford B-Max car at the event, in a move designed to showcase the technologically advanced features in the vehicle. Ford’s CEO presented an interesting keynote at the show, discussing how historical driver behaviour, travel patterns, weather information and even the driver’s schedule, could deliver a highly personalised driving experience that can enhance fuel efficiency, safety, time management and driving enjoyment. How do businesses deliver a highly personalised retail experience to their customers? It is important for marketers to understand the differences between a pure mobile strategy and a personal media strategy. The former is about efficiency and access, the latter is about efficiency and access but on top of this we add consumer engagement and satisfaction, unlocked through strategic user experience.

Alex is managing director Asia Pacific of TigerSpike. Beginning his career in broadcast media, Alex has over 15 years of experience working in the media in Australia, Europe and South America on both the client and agency side of the business. Alex has worked with many blue-chip companies delivering services for broadcast TV, interactive TV, online, mobile and tablet devices. Managing-award winning teams for the past decade, Alex has built a reputation for driving technical excellence and innovation in the industry.