Lance Armstrong begins his confession – but why Oprah?

Lance Armstrong begins his confession – but why Oprah? 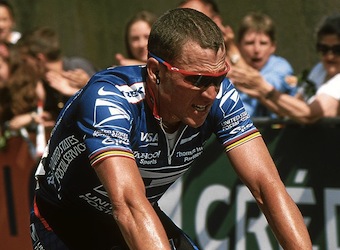 By now you would have heard about Lance Armstrong’s ‘world exclusive’ encounter with Oprah Winfrey. The first half of the two-part interview aired this afternoon (AEST), attracting much attention from media outlets (and social media) around the world.

So what did Armstrong reveal in part one?

Not a lot – but how could he, with so much on the record that had shredded any prospect of plausible deniability?

He admitted his faults, admitted to taking performance-enhancing drugs and characterised himself as “deeply flawed”, “a bully” and “arrogant”. Armstrong denied some of the most damaging accusations – such as coercing others to dope – and, notably, insisted that he’d been clean since his first retirement in 2005 (a claim that, if accepted, would help him avoid further litigation).

Armstrong asserted that he was a victim of ‘momentum’, that lots of other people were doping, and that he would spend the rest of his life apologising for what he’d done.

Lance had been both “jerk” and “humanitarian”, but right now, by his own admission, he appears as more the former than the latter. This obviously implies that the dial could switch in a positive direction.

But Armstrong’s confession reveals more than just his personal ethical frailty. It tells us something much more profound about our relationship with the media, sportspeople and the culture of celebrity.

Televised celebrity confessions such as Armstrong’s have become staples of contemporary public culture. When they involve sportspeople, especially male, they can temporarily dominate the media landscape.

Why? Not only are sportsmen among the most globally visible of all celebrities, they also stimulate romantic yearnings for the noble Corinthian struggle against the constraints of mind and body.

Hence the constant lament among sport fans about their loss of innocence when disappointed by their heroes which, for those even lightly acquainted with today’s sportsbiz, manifests as truly child-like.

In what some call the ‘attention economy‘, the travails of celebrities are valuable for a host of interests. Media outlets receive effortlessly compelling copy and audience opportunities; social media are set abuzz with outrage and rumour; pundits dispense wisdom and speculation; moral entrepreneurs find new sharpening tools for axes; and workplaces, living rooms and pubs have ready-made conversational common ground.

This is a prime case of what the British media academic Garry Whannel calls ‘vortextuality‘, the media phenomenon that, in the world of digital networks, rapidly and fleetingly draws almost everyone and everything into is orbit.

The trials of Tiger

The last time a comparable event occurred – Tiger Woods’ scripted televised apology for serial infidelity in February 2010 – the BBC led with the story on the grounds that there was no other ‘story with bigger news impact‘. US news organisations voted the scandal the 2010 ‘Sports Story of the Year‘.

Golf as it is played on fairways and greens was clearly not enough of a sports story – the real action was off the course.

In dealing with ‘sports stories’ that are so big as to interest people who wouldn’t know a peloton from a polony sandwich, the hand-picked advisors in the celebrity’s corner usually put it about that their errant charge wants to ‘unburden’.

Throwing off the insufferable weight of guilt while slipping in some self-justification, they invite sympathy and a possible way out and back. Thrashed out well in advance, these structured exchanges promise spontaneity while, in fact, delivering carefully calculated strategic execution.

Celebrities need to enlist the media as a key component of their reputational gaming, through which they seek to control how they are represented and so can be seen.

The crafted public confession – in Armstrong’s case involving the world’s best-known and most reliably empathetic interviewer – maximises publicity for his admission of doping while trying to head off subsequent attempts to pursue the matter in detail.

It garners the enormous media coverage that re-confirms the celebrity’s newsworthiness and, in the process, creates the potential for post-penitence bankability. It invites sympathy among fellow human beings who also have feet of clay but who have not been subject to the same extraordinary pressures and temptations.

After ritual supplication and humiliation, it is hoped to replicate the rise-fall-rise trajectory of celebrity redemption of others – including, perhaps, Woods himself – who have gone before.

Ultimately, then, it is a question of repairing personal brand damage. A date with Oprah is a last, desperate attempt to stave off celebrity oblivion for the likes of Armstrong, who for so long lied, litigated and bullied, spluttering with indignation whenever questioned about acts to which he has now admitted.

In reflecting, provisionally, on how Lance Armstrong fashioned his own fate, it is tempting to think of Icarus – but his only sin was hubris. Others might prefer ‘Pinocchio on Wheels’, but I keep conjuring an image of Austrian skydiver Felix Baumgartner with the emperor’s new clothes for a parachute.

Even if Lance survives his designer crash landing, his celebrity persona will be permanently re-arranged and diminished.