The disparity between the winners and losers in the latest round of magazine readership figures continues to grow with some titles jumping by more than 50% while others shed a third or more of their audiences in the past year.

Overall readership of magazines declined by 1.4%, according to Roy Morgan data for the April to June quarter, which shows readership growth for 53 titles and declines for 79.

Once again male readers pulled back on their magazine consumption while the female category showed greater resilience. The general men’s category shed 20.9% of its readers while the men’s lifestyle category also fell sharply, dropping 12.4%. The biggest losers were Picture which fell 34.5%, FHM which shed 33.3% (and was axed in March), GQ which dropped 20.8%, and Inside Sport, down 20.2%.

Citrus Media’s Game Informer was the strongest riser overall, with a 70.7% jump to 169,000 readers, while Virgin Australia Voyeur, down 42.9%, and Foxtel Magazine which dropped 38.1%, were the biggest losers.

TV and sport titles were among the hardest hit falling 22.2% and 21% respectively. The computer, gaming and info tech, music and movies, home and garden, and women’s fashion categories were the only sectors to register increases in readership. 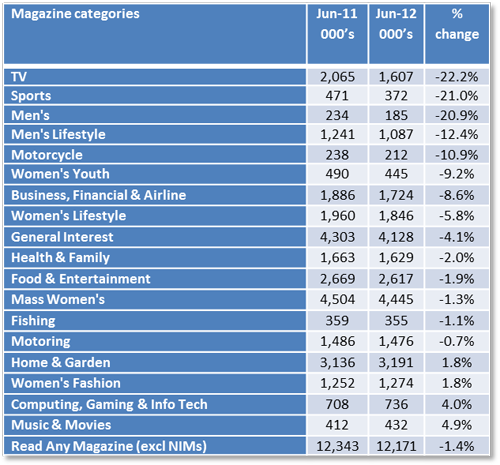 Tags:
Previous Article
Newspaper audit data: Digital up, but is it increasing enough?
Next Article
The secret to long-term B2B customer relationships