When A&E launched in February 2012, Foxtel identified that there was a gap in the market for male-skewing factual entertainment as the majority of television, outside of sport, is female skewed. The channel has enjoyed unprecedented success and affinity with audiences becoming the number-one factual entertainment channel on Foxtel.

Since its premiere in 2012, A&E has made a huge impact in Australia, with a raft of top-rating, popular and talked-about programs including Storage Wars, Pawn Stars, Aussie Pickers, Storage Hunters, Hardcore Pawn and MegaTruckers.

A&E broadcasts in high definition and lives life in the moment through its real life characters who risk everything to survive and win, ensuring that every show and every moment keeps Australian men on the edge of their seats.

While Foxtel was thrilled to have launched a brand that has resonated so spectacularly with a new Australian audience, it was looking to broaden its appeal to both subscribers and non-subscribers of Foxtel by showcasing such a highly popular channel in a way that reflected its personality and sense of humour.

Both parties recognised the amusing fact that many men in Australia are experiencing ‘Manesia’. They’ve forgotten how to be men, they wouldn’t know how to change a tyre or where to find a dipstick, and they know more about how to make a soufflé or who got voted off last night’s reality show.

Foxtel and MediaCom collaborated on a new multi-facetted national promotional and advertising campaign – ‘Manesia’ – designed to speak to males who had forgotten how to be men. 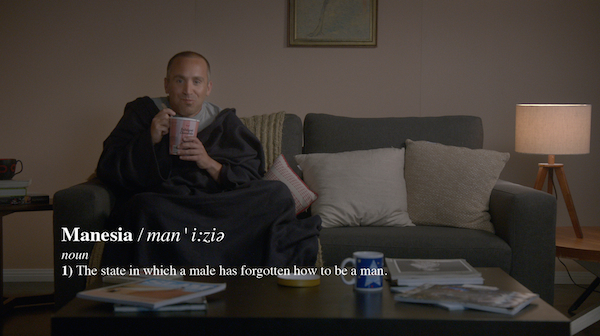 A&E stands for real characters that do extraordinary things, are self-reliant in knowing a thing or two about life and survival, while also exhibiting some great humour. It made complete sense to Foxtel and MediaCom to create an awareness campaign that is as funny as it is timely.

MediaCom developed a cross-channel media strategy in the format of a public safety campaign to halt the disease in its tracks. The campaign was designed to help ‘Manesia’ sufferers understand the symptoms and give them a cure – a prescription to A&E’s unique adrenaline-pumping, real men programming.

Designed to sound like a community service announcement, the advertising campaign targeted ‘Manesia’ sufferers aged between 25 and 39. Sufferers were prescribed a range of treatment options, all of which include A&E’s key programming: ‘Real men, doing real things, in the real world’.

Launched on A&E’s second anniversary in February this year, the campaign represents a shift in the A&E advertising strategy, aiming to showcase the A&E brand by bringing it to life in a way that both subscribers and non-subscribers can relate.

This is how they delivered the campaign:

MediaCom had to start by making ‘Manesia’ real. They enlisted the help of Triple M’s manliest talent, the Grill Team. A partnership covering prerecords, in-show integration and outside broadcasts put the condition on the national agenda. Hosts talked about the manly skills displaced by an obsession with female TV – changing a car’s oil for example -and got listeners talking about their upcoming evenings’ TV (modelling, dieting and dating). Meanwhile, on the ground, a roadshow engaged listeners in lively debate around the extent of what was beginning to feel like a national epidemic.

Then they produced an introductory piece of content that lived on Facebook. This content was centred around the voice of A&E explaining the causes and effects of ‘Manesia’ by taking the viewer through ‘exhibits’ of men who had ‘lost their way’. These pieces of content ranging from 90 seconds to 30 seconds in length were played on-air and seeded socially to relevant influencers and blogs to grow the conversation around ‘Manesia’. 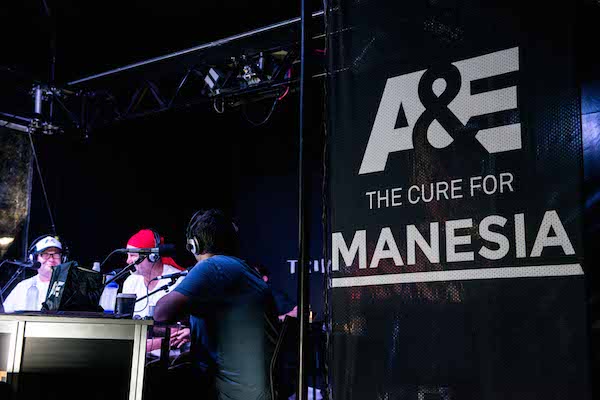 The next step was to help people recognise the condition in those closest to them.

Beer mats cheekily suggested those with a straw in their drink may be showing signs of ‘Manesia’, while coffee cups invited guys with fancier coffees to stop and reflect, and Triple M toured a confessional booth covering the wildest confessions on air. Further conversation on radio focused on men who’d lost their way, and listeners suggested the man rules they should be abiding by. Men who dobbed in a mate were rewarded with manly camping trips to help get the sufferer back on track.

Print advertising running in men’s titles aimed to stop the audience in their tracks by getting them to think about their own relationship with the condition – they caught their attention with mock content designed to appeal to their inner ‘Manesiac’ and followed it up with hard-hitting messages they couldn’t hide from. They visualised the spread of the epidemic state by state and even ran a digital utility across female websites that allowed women to test their men for signs of emergent ‘Manesia’.

Last, they created a Facebook based diagnostic tool – the ‘Manesia Quiz’ was housed on the A&E website and Facebook page. The survey asked men various questions with the goal of giving them an understanding of how exposed to the ‘Manesia epidemic’ they have been. Men were either exposed, infected or terminal and were instantly shown a comparison against the nation, state and their friends who have also been diagnosed. 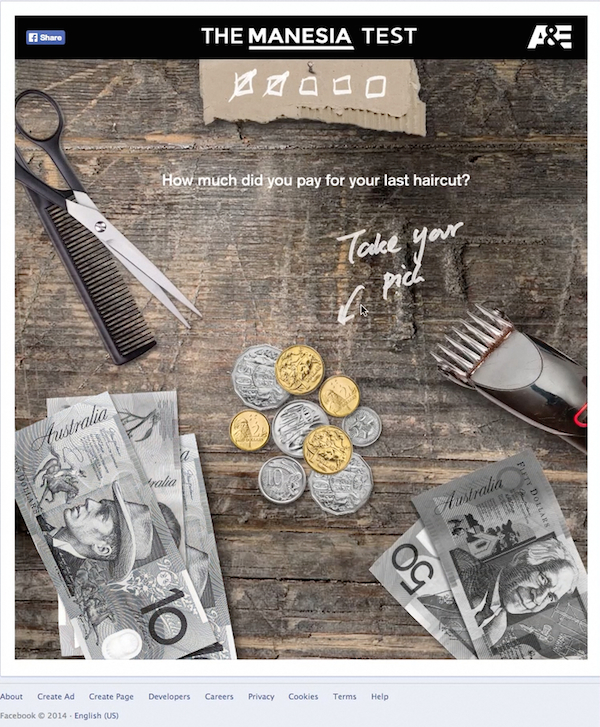 The third stage was the payoff – this is when it was made very clear that the only medicine was A&E.

They did this by putting some manly talent and their very real stories front and centre, promoted across radio, press and digital to close the loop on the campaign.

Manesia really struck a chord with Australian men. The key metric of prompted brand awareness leapt by 66% among all FTA viewers, and 133% when it came to the target of males 25-49. This was over three times the original target.

What this means is that many more Australian men now know about A&E and its sensational male programming.

Beyond that, unique visitors to the A&E website housing all the ‘Manesia’ content rose by 298% year on year, with video views specifically up 68%.

Crucially, ‘Manesia’ started conversations. A&E’s own social accounts saw an increase in engagement of 74% (versus pre-campaign) and its social reach grew to 395,616 – up 95% year on year.

Finally, and most encouragingly, A&E’s overall share of audience grew 20% versus other factual programming – a very strong result given the size of the brands A&E was up against (History Channel, Discovery, National Geographic and BBC Knowledge). 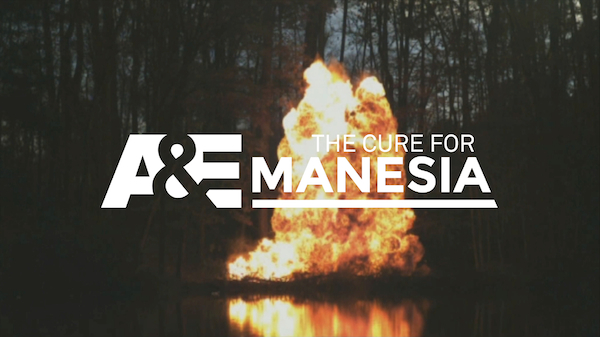