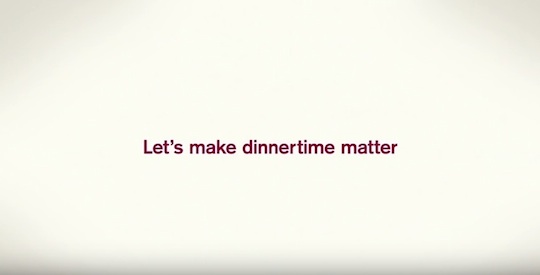 If you could have dinner with anyone, living or dead, who would it be?

That’s the question Mars Food is asking Australian families for a new Masterfoods campaign designed to prioritise and celebrate dinner after research revealed the meal created important connections between families.

The campaign, titled ‘Let’s make dinnertime matter,’ is based around findings that suggest 78% of Australians get more connection from sharing a meal with loved ones than they do through any other activity. Despite the findings, nearly 75% of people said they’d change something about their dinners.

In creating the video to accompany the campaign, Mars Foods toured the country, filming at a variety of community locations, asking parents who their perfect dinner guest would be. Following this, the children were then asked same question. The results, apparently real and unscripted, are quite surprising.

In an attempt to show families from all walks of life, street casting and local community outreach was conducted.

In addition to the video, an out-of-home and print campaign components were established to again reinforce the role of dinnertime in establishing connections within families. In a similar manner to the video, the ads feature real Australian families connecting over dinner.

The campaign is also utilising social media outlets, including Twitter and Facebook, by encouraging conversation around the hashtag #makedinnertimematter.

The campaign is supported by a report, ‘Lifting the Lid on Dinnertime’, which was commissioned by Mars Food Australia to further investigate how food shared with company contributes to our emotional well-being.

The results of the report suggested that when it comes to dinnertime in Australia, more people put greater emphasis as to what is going on around the table, rather than what is actually on the plate.

Since the launch of the campaign on 15 February, the video has been viewed over 8.5 million times and has received significant support on social media platforms.

Tags:
Previous Article
Brands on the street: how outdoor advertising works for the luxury market
Next Article
Interview: Ken Segall on why simplicity doesn’t exist and why people love criticising post-Jobs Apple