McDonald’s wants you to pick up after yourself

McDonald’s wants you to pick up after yourself 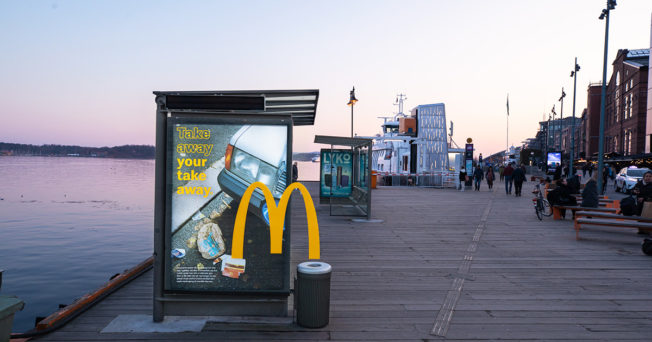 Every business relishes the opportunity for organic marketing. It’s why it will print its big, immediately recognisable logos all over packaging. This turns shoppers into walking, talking billboards.

For Macca’s though it’s a different story. Much of impromptu OOH marketing winds up on the side of roads, at bus stops. It ends up pretty much everywhere but in the form of litter.

We’ve all seen it – a greasy, torn brown bag featuring the golden arches. It will adorn your neighbourhood gutters. It’s a ubiquitous image – but hardly an appetising one.

With the release of a new campaign, the fast food giant announces its desire to clean up its image. In Norway, at least.

The campaign will feature photography from Jói Kjartans. It features shots of McDonald’s packaging strewn everywhere except the garbage. The images – which are actually kind of beautiful, in a grimey, grungy, urban-documentary style sense – will also include the message “take away your take away.” In smaller text, there is an additional message. It declares McDonald’s commitment to cleaning up the streets. It also requests for you to do the same.

“Unfortunately too much of our packaging ends up on the streets. Now we are doing our biggest effort yet and will clean even more than we already do,” the copy reads.

“But we aren’t able to get it all, and need everyone to contribute. Please remember to throw away your litter in the bins next time you buy takeaway from us.”

The ads are a refreshing instance of a company taking responsibility for the impact its products have on the environment.

Mari Husby, senior marketing manager at McDonald’s Norway, spoke of the campaign: “We’re responsible for one of the biggest and most visible parts of littering”.

Husby added that McDonald’s “[has] both a great responsibility and an enormous power to contribute to change.”

The campaign hopes to generate public goodwill. It’s repositioning as a forward-thinking, respectable policy partner. Alongside the new ads, McDonald’s Norway announces it has joined with Keep Norway Clean. This is a nonprofit that hopes to reduce unconscious littering.

Many of the OOH marketing installations will also handily place garbage bins beneath the terminal arch of the iconic “M”.

Hopefully this campaign will remind us all to be responsible citizens. Don’t throw your rubbish on the side of the road. Place it in a bin instead. It can then be safely deposited in a landfill or the giant continent of garbage floating in the ocean where it will of course do no harm.