The days of the Minority Report, where billboards serve personalised ads to those who approach, may be upon us. Overnight, a bus shelter billboard in the UK using built-in camera and facial recognition technology started serving customised ads to passers-by.

According to a report on The Drum, the billboard, located on Oxford Street in London, uses facial recognition technology to show women an ad for children’s charity, Plan UK.

Women will be the only ones to see the 40-second promotion of the charity’s ‘Because I Am a Girl‘ campaign, while men will see nothing other than the charity’s campaign website. 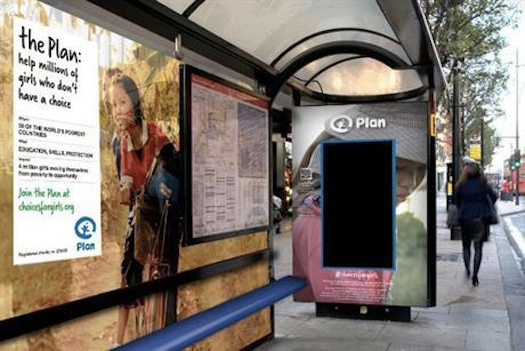 Plan UK, which works to ensure education for girls in developing countries, chose to exclude men from seeing the ad to send a message about equality.

Chief executive of the charity Marie Staunton says, “Plan’s ‘Because I am a Girl’ campaign works with women and men, girls and boys, to challenge the discrimination that girls face as a result of their gender.”

“We’re not giving men and boys the choice to see the full ad on this occasion – so they get a glimpse of what it’s like to have basic choices taken away.”

The ad, which reportedly cost AU$44,400 to create, was developed by Clear Channel UK and 3D Exposure who are working together to integrate facial recognition technology with advertising. The system is reported to work with 90% accuracy.

Below is the extended version of the ad airing to women who enter the billboard’s range.