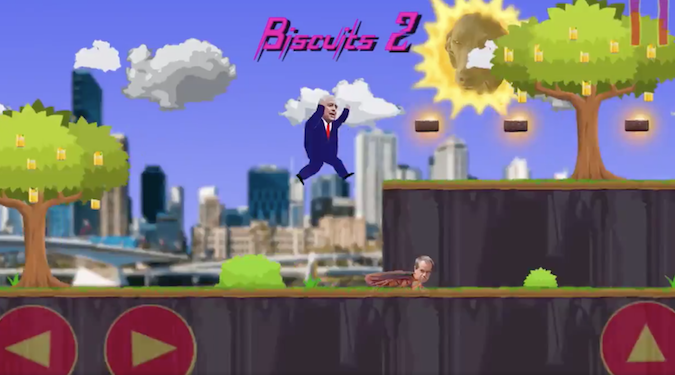 Clive Palmer and his United Australia Party are once again in hot water for crossing the privacy line with voters; the party’s recently-released mobile game includes location and identification tracking features.

Following the text message scandal from earlier in the month – which saw the United Australia Party (UAP) send millions of ‘unsolicited’ text messages to Australian voters – Clive Palmer is once again being accused of breaching Australians’ privacy. This time, with a smartphone game, Clive Palmer: The Humble Meme Merchant.

Downloaded to more than 30,000 phones since its release two weeks ago, the app has been discovered to include features allowing it to track approximate location, phone status and identity – including names and Google email addresses – and read, modify or delete content from USB storage.

The game’s tracking features appear only on the Android version of the app.

The app was developed by Emu War Games owner Tom West, who operates the company out of a Sydney co-working space. West tells the ABC that the features were not switched on, insisting that the game was not designed to harvest voter data.

“This app does not track anything whatsoever,” West tells the ABC.

“The best way that people can actually go and check that on their Android device is to go into the settings, and app permissions, and they can see that the app has not requested access to anything.

“To actually access that information, we have to ask the user – which we don’t.”

According to West – who admits to never having designed a smartphone game before – the tracking functions were accidently included as default settings from the software template he used to create the game.

How surprising @CliveFPalmer @UnitedAusParty are #data mining via their “game app”? Palmer soiled our enjoyment of the @AustralianOpen with his constant #trump style gobbledygook political ads pretending there was an election running. #auspol #ausvotes2019 https://t.co/EYfr1oo2cz

West told the ABC that he has already removed the tracking features from the code base, “but I didn’t want to remove them before this interview because it would seem a bit disingenuous if they suddenly disappeared before we discussed them.”

The game itself is a two-dimensional, Mario-esque platformer in which the player operates as Clive Palmer. The character collects floating Tim Tams and defeats enemies such as Richard Di Natale, Bill Shorten and Prime Minister Scott Morrison – scored to a crude reimagination of Culture Club’s ‘Karma Chameleon’ with lyrics such as, “Palmer’s worth a billion … he’s got 12 boats and he needs your votes.”

The game was also reportedly funded in part by the party’s campaign fund.

Previous Article
Lavazza Australia MD goes deep on global strategy, tennis and ‘Italianness’
Next Article
Marketing in 2025 across ANZ: how our priorities, skills and tech will change