The hemp ale product release coincides with the ACT’s legalisation of growing, smoking and possessing marijuana – new legislation that kicks in today.

East 9th released Hempire, Australia’s first hemp beer, in 2017, to celebrate the legalisation of hemp products in food and beverages at that time. Notable North American beer industry giants like AB-Inbev and Molson Coors are investing in the cannabis industry, too, which – since legalisation in Canada and a growing number of US states – has provided green pastures for countless startups. 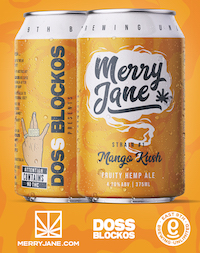 “We wanted to be the first to celebrate further changes in cannabis legislation,” says Josh Lefers, one of the three founders at East 9th.

“Who better to partner with than Merry Jane and its iconic founder?” continues Lefers. “The media platform brings positive attention to cannabis culture and normalises conversation around it.”

Using hemp to flavour beer isn’t too much of a stretch. East 9th co-founder Benjamin Cairns reminds readers “hemp, cannabis and hops are all from the same plant family and can share similar taste and aroma characteristics.”

East 9th plans to release a range of hemp beer strains throughout the year.

Doss Blockos and Merry Jane are donating all proceeds to the World Wildlife Fund to help animals that have been injured or killed in this year’s catastrophic bushfire season.

Merry Jane’s Mango Kush cans are available in Australia at select bars, restaurants and retailers. The partnership is planning for a US launch in the near future.