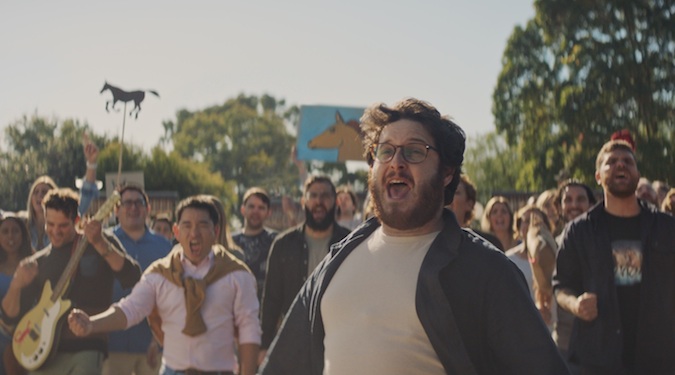 Beer company Hahn has launched its new ‘Now You’re Talking’ brand platform, celebrating the “conversation between mates over a beer.”

In collaboration with Ogilvy Sydney, this week Hahn announced its latest campaign. ‘Beer Banter’ will be supporting the brand’s new platform, launching with a 30 second TVC featuring a group of men debating history’s most ‘epic pub anthem ever’.

“There’s nothing more Aussie men love than a bit of banter over a beer with their mates discussing all of life’s big, and not so big issues,” says Ogilvy Sydney ECD, Derek Green. “The ‘Beer Banter’ campaign, across all its executions, takes a good look at these conversations and the connections they have always had.”

The $12 million campaign will also be rolling out over social, digital, OOH and PR.

Hahn has also partnered with Geometry Global to amplify the campaign, ‘conversation starters’ such as those featured in the ‘Beer Banter’ TVCs will appear under Hahn bottle caps and on pub coasters.

“From ‘Who is the greatest ever action hero?’ to ‘The fast bowler you’d least like to face?’ and even ‘You’re a pro-wrestler. Your theme music is?’,” continues Green. “These questions will get pub conversation flowing as freely as the beer.”

Lion Portfolio Marketing Manager, Amy Darvill says the aim of the campaign is to inject “a bit of fun” back into beer marketing. “While busy lives might sometimes get in the way, what’s a bigger or more popular pastime than catching up with mates for a beer in a pub or over a BBQ? We want this campaign to get this simple pleasure back on everyone’s radar.”

Previous Article
Case study: how RSPCA Queensland solved pet peeves with better experiences
Next Article
Where content marketers go wrong and the easy way to discover what an audience wants