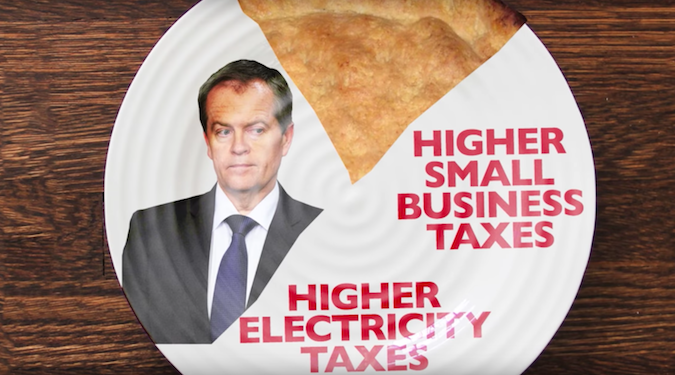 The Liberal Party of Australia has unleashed its series of ads attacking Bill Shorten on taxes, retirement and borders.

This week, the Liberal Party of Australia released four 30-second spots in anticipation of the 2019 Federal Election. The ads highlight specifically The Liberal Party’s predicted effects of a Shorten administration.

“When Labor was last in government, over 50,000 illegal arrivals reached our shores, costing taxpayers billions of dollars,” says the ad.

The campaign is being carried on the slogan, “Labor, the Bill Australia can’t afford.” One of the four spots, ‘Labor’s Small Business Taxes’, takes a particular focus on food puns:

The Liberal Party continues, “It’s hard enough to earn a crust when you run a small business, now Labor wants a bigger slice of your pie.”

“And you can bet they’ll come back for seconds too. How will you put food on the table with Labor’s huge appetite for taxes?”

“Shorten’s out of control spending is a recipe for disaster.”

Essentialvison reports that as of the beginning of June the Labor Party saw Australia’s popular favour at 54% preference, with the Liberal National coalition at 46%.

However in terms of leaders, the same survey found 41% of Australians in preference of Malcolm Turnbull remaining in the top job, with Bill Shorten at 27%. Almost a third of respondents (32%) were undecided.