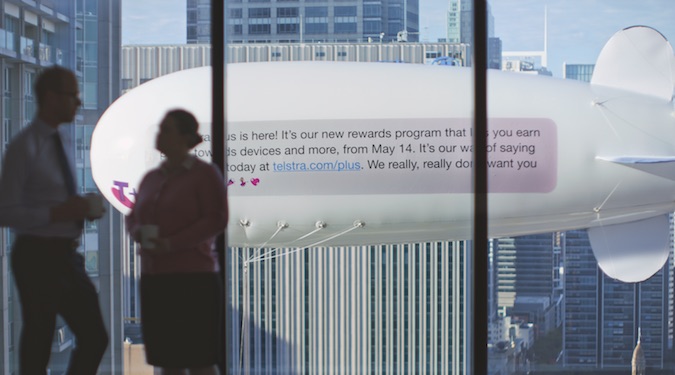 Telstra CEO Andy Penn called it an ‘Australian telco first’ upon announcing the new rewards program at Telstra’s Melbourne Discovery Store on Bourke Street. Doing away with its former rewards program, ‘Telstra Thanks’, the new Plus program is set to offer eligible customers live sporting and entertainment discounts, new devices and more.

Today, The Monkeys unveiled the new rewards program’s first television and radio spots – the latter of which includes a cameo from Michael Bublé.

The 30-second television spot revolves around Telstra’s alert message to customers, letting them know about the introduction of Plus. In the spot, Telstra finds this message so essential that it has plastered it around several rather unorthodox communication mediums including fortune cookies and the side of giant ram statues.

The accompanying radio spot echoes a similar urgency, though apparently not enough to convince Bublé to sing the message.

“A rewards program like Telstra Plus should be fun and feel rewarding in itself,” says The Monkeys creative director Ben Sampson. “Rather than just rolling it out, Telstra decided to play with the creative and use the announcement to engage with their customers even more.”

Upon announcing Telstra Plus, Penn explained that the new rewards program is better suited to Telstra’s evolving offerings, “Many of our customers have been with us since before the days of internet and mobile phones.

“As we start to unlock the latest generation of technology through 5G, Telstra Plus is our way of saying thank you for being with us today as we move through an exciting time.”

Members of Telstra’s Plus program will be separated into tiers – ‘all members’, ‘silver’ and ‘gold’ – depending on the length of their relationship with the telco and their average monthly bill. Gold members will receive the full force of Plus’ advantages, including ‘VIP service’, which Telstra has yet to explain in detail.