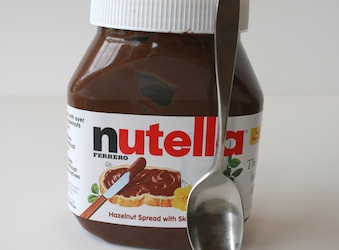 A die-hard Nutella fan loves the Hazelnut spread so much, she organised a global holiday around it, aptly named, World Nutella Day. Unfortunately for founder Sara Rosso, Nutella’s parent company, Italy-based Ferrero SpA, weren’t all that thrilled with the idea, sending Rosso and fellow organisers a cease-and-desist letter.

World Nutella Day was created in 2007 when Rosso, an American blogger living in Italy, thought there should be a day dedicated to Nutella each year. She runs dedicated social media channels about the day, and the event attracts participants from across the globe.

Rosso wrote the following in a blog on the World Nutella Day website after receiving the injunction: “The cease-and-desist letter was a bit of a surprise and a disappointment, as over the years I’ve had contact and positive experiences with several employees of Ferrero, SpA, and with their public relations and brand strategy consultants,” she writes.

A short while after Rosso made the legal action public to the thousands of World Nutella Day fans, Ferro SpA seemed to have had a change of heart, releasing this statement:

“Positive direct contact between Ferrero and Sara Rosso, owner of the non-official Nutella fan page World Nutella Day, has brought an end to the case. Ferrero would like to express to Sara Rosso its sincere gratitude for her passion for Nutella, gratitude which is extended to all fans of the World Nutella Day. The case arose from a routine brand defence procedure that was activated as a result of some misuse of the Nutella brand on the fan page. Ferrero is pleased to announce that today, after contacting Sara Rosso and finding together the appropriate solutions, it immediately stopped the previous action. Ferrero considers itself fortunate to have such devoted and loyal fans of its Nutella spread, like Sara Rosso.”

Rosso was completely taken aback from the actions of Ferrero SpA, concluding on her website, “There have been songs sung about it, short films created for it, poems written for it, recipes tested for it, and photos taken for it. The cease-and-desist letter was a bit of a surprise and a disappointment, as over the years I’ve had contact and positive experiences with several employees of Ferrero SpA, and with their public relations and brand strategy consultants.”

World Nutella Day is still expected to run on February 5 next year as planned.

Tags:
Previous Article
Yahoo buys Tumblr for a reported $US1.1 billion
Next Article
The Era of the Buyer