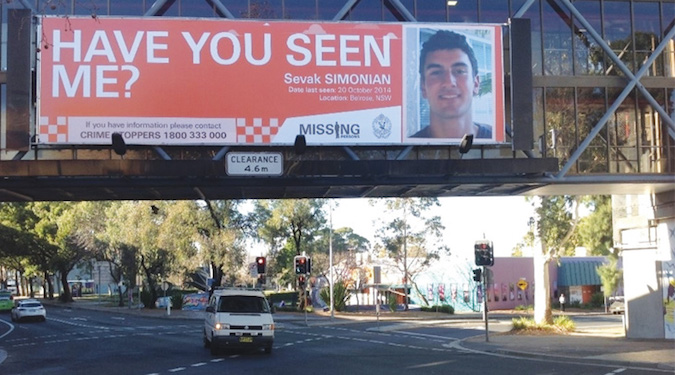 The OMA and its members have launched a national OOH campaign to shine a light on the 38,000 people who go missing each year for National Missing Persons Week.

The 2017 campaign marks the ninth year that the Outdoor Media Association (OMA) has supported National Missing Persons Week (NMPW) in New South Wales, and the third year in partnership with the Australian Federal Police.

The out-of-home (OOH) campaign features 2000 signs nationwide which have been donated in an attempt to raise awareness around the issues and impact faced by the loved ones of missing persons.

The signs and work equate to $944,000 in donated advertising and production costs Australia-wide.

This year the campaign focuses on the following missing people:

“Often people are cynical about the role advertising plays in society, but campaigns like NMPW show the power of advertising to do good,” says Charmaine Moldrich, OMA CEO.

“It raises awareness, it educates, it gives a voice to those who don’t always get heard. We are committed to using the strength of OOH to spark a conversation that drives action, because if people see something, they are likely to say something” continues Moldrich.

The campaign launches today at the Gabba in Brisbane, though OOH activity for the campaign began on 24 July.

Previous Article
What can Woods, Froome and Thurston teach us about branding?
Next Article
World Cup 2018: get your Facebook tactics ready for the biggest marketing event ever seen