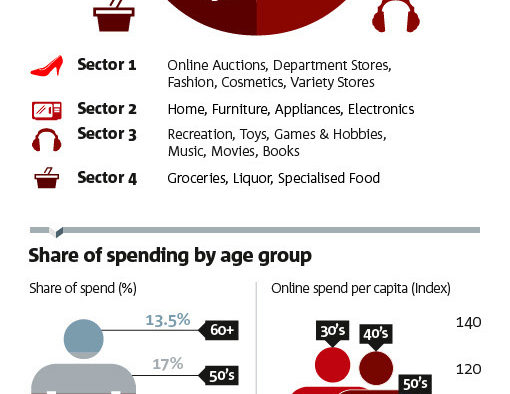 Growth in online retail continues to outpace traditional retail at a rate of almost four to one, but the online pattern is changing as its growth slows and domestic retailers begin to hit back at international competitors.

National Australia Bank’s latest ‘Online Retail Sales Index’ found that Australians spent $11.1 billion online over the year to April, a 15.5% year-on-year increase. However, the pace of growth in online sales for last month was down significantly on the previous two months, with sales rising by 26.4% in February and 19% in March.

The current period of analysis also revealed that while online growth had slowed, domestic retailers hit back at their international counterparts, showing stronger growth than their often larger and more sophisticated competitors. Australian operators experienced growth of 16% year on year, compared to 13% for international sites, continuing a shift back to local retailers which began in the latter stages of last year after hype around the dollar reaching parity died down.

Looking deeper into the numbers, a downturn in the household goods and electronics sector was the key driver of the overall slow down, with growth turning negative in April, down by 5%. This sector diverges from the other categories of online sales, which were stable at or above 20% year-on-year growth.

According to group chief economist at NAB, Alan Oster, a weakening in domestic demand and consumer behaviour regarding tablet sales may have contributed to the downturn in the electronics sector.

The figures warn of continuing weakness in electronics, which has resulted in profit downgrades for the likes of Harvey Norman, JB Hi-Fi and Dick Smith, spreading to online retailers also. In recent months major retailers including Myer, David Jones and Target have laid out plans to upgrade their online presence in an attempt to shift to an omni-channel strategy and guard against the soft market.

Despite the downturn in fortunes, NAB’s report shows that traditional bricks-and-mortar retailers continue to dominate, accounting for 94.9% of sales. But growth among offline channels remains significantly lower than online, at 4.1% year on year in March according to the ABS.

Tags:
Previous Article
Your marketing quote and niche ad option of the day – 29 May 2012
Next Article
Do we need rocket scientists or marketing polymaths?