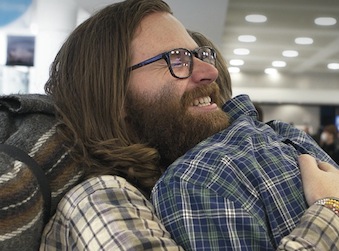 The new Qantas brand campaign, called ‘Feels Like Home’, is TV-led and tells the stories of five passengers and their journey home to Australia being welcomed at the airport by loved ones.

It’s an emotional campaign, and the airline will no doubt be hoping it goes some way to reconnecting it with customers following its worst year ever. In August Qantas announced the biggest loss in its history: $2.84 billion.

Five 60-second videos have been created around each of the homecoming stories, together with a longer two-minute montage (below). These will be screened on free-to-air and pay TV, digital and supported by out-of-home, cinema and print advertising.

The music is a rendition of the Randy Newman song ‘Feels Like Home’ performed by 20-year-old Australian singer, Martha Marlow. The song will also be played on board Qantas aircraft.

Qantas Group CEO Alan Joyce said the campaign was designed to celebrate the unique place Qantas has in the lives of many Australians: “For almost 100 years Qantas has been bringing Australians from all around the world home to the people and places they love.

“We often hear that seeing the Qantas red tail at an airport, or stepping on board a Qantas aircraft, makes Australians feel like they’re halfway home already. That’s the spirit we wanted to capture.

“The stories we’re telling through this campaign are repeated everyday across our network. They reflect the special pull of home, the love of family and friends and the way Qantas helps bring Australians together around the country and around the globe,” Joyce said in a media release.

A Qantas spokesperson told Marketing that the airline isn’t revealing the budget or media spend of the campaign, but that it is being “very agile” with planning and media buying to allow it to maximise locations, time slots and digital channels that are performing well.

The creative agency behind the campaign is Lawrence Creative Strategy, with production by Exit Films.