Qantas and Lenovo are among the next set of brands to launch Instagram advertising campaigns before the end of the year, joining Vegemite, Tourism Queensland, Toyota and other select brands.

Qantas’ paid Instagram content will be an extension of its ‘Feels like Home’ campaign, which shows emotive scenes of different Australians returning home from various trips.

Lenovo’s campaign will centre around images showing people using technology in unconventional places such as on the beach, using the #dodifferent hashtag.

Instagram was busy sharing information about its new sponsored post advertising offering this week, hosting brands and media at an exhibition event, ‘Branding Beyond Words’, at Sydney’s Carriageworks.

The company chose about 25 images posted to its social platform by brands to print up and display in an art gallery style – highlighting Instagram’s message to brands that advertising content should be creative and inspirational enough to hang up as a piece of art.

Some images were chosen from organic content and others formed part of recent advertising campaigns locally or in the US and UK. 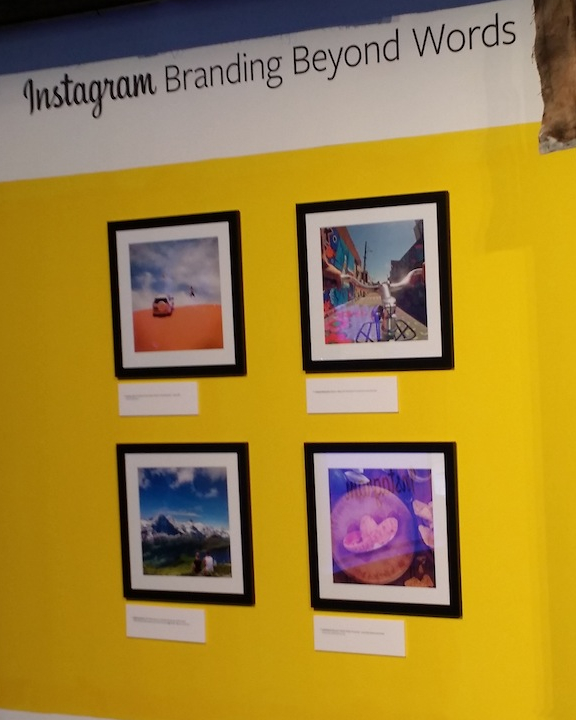 The latest Instagram research has found that one out of every three minutes spent on mobile in Australia is on either Instagram, Facebook or WhatsApp. 13 to 24 year-olds are checking their Instagram feeds on average five times a day, and 42% say they’re regularly engaging with brands.

Instagram is being very careful about the slow rollout of its advertising, or sponsored posts, which feature in users’ news feeds as normal images with the addition of a ‘sponsored’ label.

Each user will only see a maximum of one sponsored post a day, and it will be placed in fifth or sixth position down the news feed.

To target the ads, Instagram collects demographic information including age and gender (and other information it can get through sister site Facebook when users’ accounts are linked), as well as behavioural data. For example, someone who has recently been looking at wedding photos is more likely to be shown a wedding-related sponsored post.

Blachford said early results from initial campaigns were “really promising”. Instagram employs Nielsen for every campaign to provide data on branding metrics rather than simply looking at social metrics.

“We think metrics like followers, likes and comments are all nice to haves, don’t get me wrong, but the real measure of success for a campaign on Instagram is the success that it plays at the top of the funnel, on branding metrics,” Blachford explained.

“You’ll hear us talk a lot about things like the shift and the impact that we’re having on ad recall, message association, product awareness, consideration for purchase intent, favourability and that kind of stuff that really matters to brands.”

Tourism Queensland, the only local campaign that has seen finalised results at this early stage, reached more than 770,000 people in their target market, people aged 25 to 54, and saw a 25 point lift in ad recall.

Ben & Jerry’s campaign in the US with its launch of the ‘Scotchy Scotch Scotch’ flavour reached 9.8 million people, saw a 33 point lift in ad recall and an increase of 17% of people who were aware of the flavour. 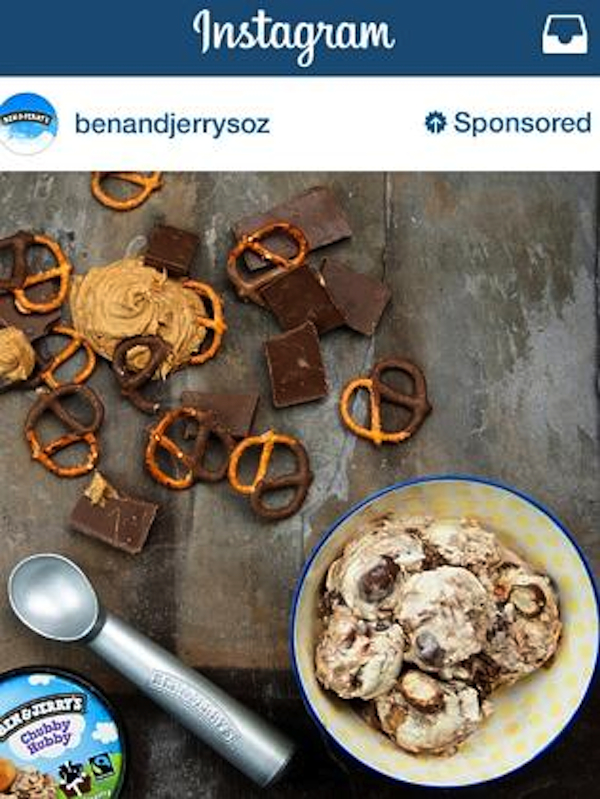 “It was really important to us that these images flowed naturally into users’ news feeds. We wanted to enhance and not clutter their news feeds,” she explained.

Ben & Jerry’s next mission on Instagram in Australia will be to share its social missions with the community, Swaik said.

“So far we focused on our product and a bit about our brand. The next step for us would be to find an exciting way for us to tell our social mission story through this platform. We can engage [18 to 35 year olds] on issues that are really important to us and help them take action.” 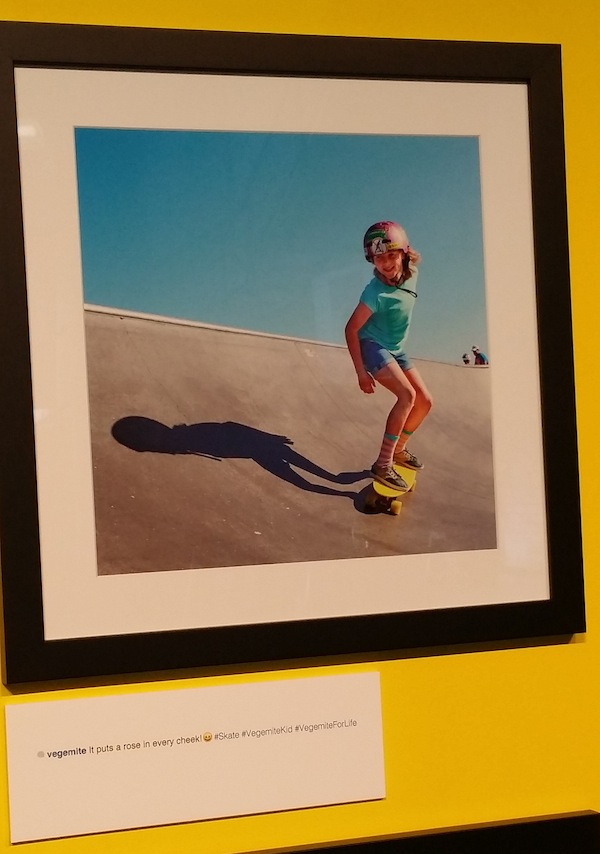 Vegemite senior brand manager at Mondelez, Justin Taylor, described his team’s learnings from participating in a series of strategy workshops with his creative agency and the Instagram creative team.

The brand walked into the workshop expecting to make plans surrounding its first strategic pillar of food inspiration, but ended up focusing on the second, around ‘vitality, energy and health’.

“It became clear really early on in talking with Instagram in those sessions that we were probably a bit constrained in our thinking.”

Vegemite’s Instagram strategy came from the team really involving themselves in the Instagram community and latching onto the trend of #yellowmondays.

“On Monday’s it’s pretty grey and yucky, and there’s a whole movement in Instagram of people taking shots of beautiful yellow, bright, vibrant items and posting them on Mondays. Throughout our entire campaign we actually brought in the creative device of a splash of yellow in all our pieces.”

Although Vegemite’s analytics team took a little convincing to agree to an FMCG campaign featuring no product shots, Taylor said the banner that scrolls with Instagram posts showing the brand name was enough to get them over the line.

“What makes Instagram probably different from a lot of other channels is that consumers are actually going into Instagram looking to be involved in the imagery that they’re seeing and the brands that they’re following. That’s really powerful for us in terms of telling our brand story.”

As a technology market challenger, Lenovo is prioritising digital and social – spending about 70% of its marketing budget in those areas (that’s about $7 million) and zero in above the line advertising.

While social media is all about engagement and word of mouth, images are a great way for consumers to tell if a brand is genuine or not, Reynolds said.

“As a marketer, I pay a lot of money for a shoot but I want true engagement with people, parodying and making fun of us, or coming up with their own images. When you have advocates they’re your best ally.”

How brands are getting professional on mobile

Instagram is certainly a mobile-first platform, with the purists believing all images posted to the platform should be shot on a phone camera. So how do brands manage to embed their professional campaign imagery into this environment?

“It was really important to capture the moment but also to capture the artistic nature of what we’re trying to communicate to customers. So all our advertising is shot professionally, then we process that for Instagram. When we were evaluating what shots to choose, we actually loaded them into Instagram. So we didn’t look at them on a computer screen, we didn’t look at them printed out. We loaded them into a shadow account and then evaluated what creative was working best within the platform.”

“We actually did a trial of every one through the mobile phone because it was easier to get the dimensions right; it was much harder on a proper camera to actually get a feel for how it would look on a mobile. So we did it the other way – we almost took everything with a mobile, and if it wasn’t coming up or we needed to add anything we’d actually go and take that with a proper camera, so we were using them in parallel.”

“I don’t have any of my company’s photo shoots in my house on my wall. I’ve run lots of photo shoots with celebrities and others, but i’d rather put one of these on my wall. I think you need to have something thats going to be inspirational; it’s got to be a high level of execution to cut through, and that’s why we did it professionally.”