This case study details VB’s campaign to reconnect with its loyal customers – hardworking Aussie blokes. The brand rebuilt its credentials through out-of-home advertising and integration with cricket, explained here from objectives to strategy, execution and results.

Like Vegemite and Paul Hogan, Victoria Bitter is as Australian as they come, and has been rewarding honest, hardworking, Aussie blokes with a ‘big cold beer’ since the early 1900s. The top-selling beer’s iconic tagline ‘For A Hard Earned Thirst’ captured the simple principle of a hard day’s work for a fair day’s pay, followed by an ice-cold beer at the end of it.

However, over the course of the last decade, VB began losing sales by the stubbie-load. The brand had lost relevance in the context of an emerging, modern Australia in a category fixated on talking almost exclusively to younger ‘officey-types’ with well-manicured hands. VB’s attempts to modernise, including a shift towards on-trend lower alcohol volume and slickly designed packaging and logo, only served to increase hostility towards the former Aussie favourite. 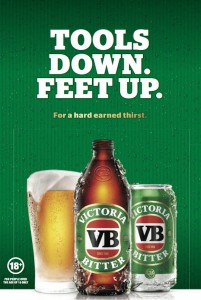 MediaCom set out to urgently restore Aussie drinkers’ trust in VB by reconnecting with its hardworking Aussie roots to return to its rightful spot as Australia’s number one beer.

The reaction of brand loyalists to VB was more emotional than MediaCom could have imagined. So deep was their connection to the brand that it was hard for these blokes to hide their anger and frustration. They found that all VB’s recent changes had resulted in feelings equivalent to ‘losing a mate’ and a strong consensus that VB just didn’t understand them anymore.

Not only had VB been getting its product wrong, it had also lost its grass roots connection and association with a good honest day’s work, failing to recognise and reward the daily grind that was the foundation of Australia. With one bloke saying, “I just wouldn’t grab a VB after work anymore,” the proof was right there and it hurt, to say the least.

CUB wasted no time in attempting to repair some of the damage, releasing a letter of apology, promising that it would make things right again with VB. And CUB did just that with an immediate switch back to the old style VB packaging and a return to the original VB recipe.

The changes that were made showed promise, rebuilding VB’s credentials and going some way towards giving its former drinkers a reason to believe once more, yet the big challenge was still to regain a role in their lives via a clearly defined communication strategy to get them drinking VB again. Insight work by MediaCom confirmed that Aussie blokes and the core VB consumer is a no-nonsense type. When they are at work they work, and when work’s over it’s over. They wanted a straightforward message delivered in a straightforward way.

The chosen strategy aimed to celebrate this overlooked, down-to-earth bunch of blokes, showing both gratitude and appreciation for their working efforts, as well as providing them with a timely reminder that their hard earned thirst deserved a big cold beer. The ‘Knock-Off’ campaign set out to own the coveted hours between 3pm and 6pm, leveraging media connections that focused on the mass ute commute home towards the end of the week – the channel selection and behaviour falling naturally out of this uncomplicated, typically VB approach.

VB also aligned closely with the things these guys were naturally doing once they’d ‘knocked off’ from work, the likes of watching cricket featuring high up on the agenda. This was about a humble thank you, an acknowledgement and a simple prompt to grab a VB at the very moment they deserved it most.

Large format out-of-home advertising was secured on 100% outbound sites on major arterials leading to the outer suburbs with sites cleverly selected based on mapping construction work being conducted in key areas. MediaCom combined this with 30-second spots placed on the target market’s favourite radio stations on Thursdays, Fridays and Saturdays, targeting times they were in the ute heading home, tactically placed five and 10 minutes after the hour.

The VB brand was integrated into the cricket telecast for the last hour of play on Fridays and Saturdays and even extended the platform into key test matches with commentators celebrating the player who had worked the hardest that day, with ‘brought to you by VB’.

Real-time VB Ashes scoreboards were unveiled in Sydney, Melbourne and Brisbane during the test season, reminding blokes it was time to ‘Knock-Off’. The scoreboards connected to Wi-Fi networks, enabling cricket scores to be broadcast live. MediaCom knew hard-working Aussie blokes didn’t always have the time to sit down and watch five days of their beloved test cricket, so this made this possible and they thanked VB for it in droves. 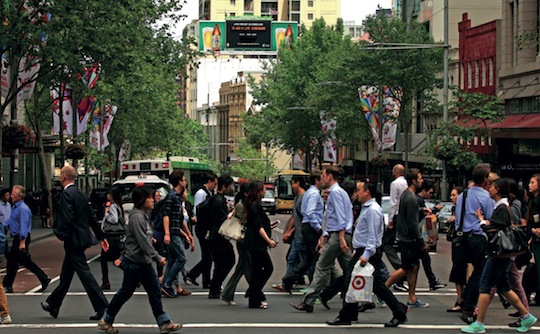 Working on VB, MediaCom takes results very seriously and used econometrics to accurately quantify the effect of advertising and other relevant factors on VB’s performance by modelling weekly sales data across six regions in Australia.

All major factors that could influence sales were tested for and captured in the model, including price and discounting effects, distribution, seasonal influences, marketing investment and longer-term impacts.

Measured econometrically, the ‘Knock-Off’ campaign delivered 77% more media driven sales than would have been expected based on the previously measured advertising performance for that level of investment.

Overall, sales were 4.4% higher than they would have been had no media run over this period.

Following the relaunch and campaign, the brand posted its first four quarters of consecutive growth in over 10 years.

The most satisfying part was seeing VB back at its rightful place as the number one selling beer in Australia. When the team at MediaCom Melbourne heard the news, they sat back and rewarded themselves in the most appropriate way: with a certain brand of ‘Big Cold Beer’.