M-commerce sales are on track to surpass $5 billion in Australia this year, with one in three now transacting via mobile devices and even more using them as product-discovery tools.

The findings from online retail portal eBay and payments service PayPal forecast spend through mobile channels to hit $5.6 billion in 2012, compared with just $155 million in 2010. But the value of mobile devices to retail doesn’t stop there, according to Melani Ingrey of Nielsen, with new screens growing the role of online media during the purchase cycle.

Based on research conducted by Nielsen among 3200 people in October, the proportion of Australians transacting on mobile devices has seen strong growth over the past 18 months, up from 12% of online Australians in January 2011 to 32% today. Looking at smartphones and tablets in isolation, the smartphone is used more commonly with 25% of the population engaging in this activity compared to 16% who transact via tablets.

Similarly, the use of smartphones as a discovery device is more widespread at 47% than the use of tablets at 25%. 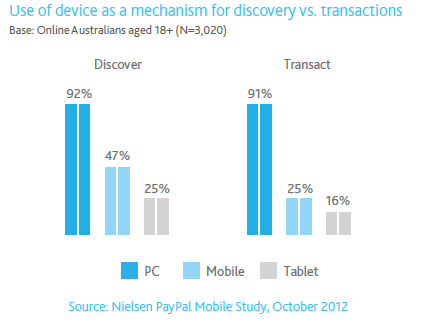 The increase in access of mobile content is a valuable proposition for retailers as mobile devices provide a range of opportunities to support consumers’ discovery of what to buy and where to buy it from, not to mention facilitating purchases, Ingrey says: “Much of this growth has been driven by the ever increasing penetration of mobile devices across all demographics as well as strong attitudinal shifts.”

The study forecasts smartphone penetration to close the year at 64% of online Australians, up from 51% in 2011, and points to an increased appreciation of the convenience mcommerce provides.

Among those involved in shopping behaviour on their mobile devices, search remains the most common starting point of the discovery process. Two in three start the journey at this point, eclipsing emailers, a starting point for 29%, apps, for 26%, links on Facebook, for 24% and online ads, for 19%, as a trigger. 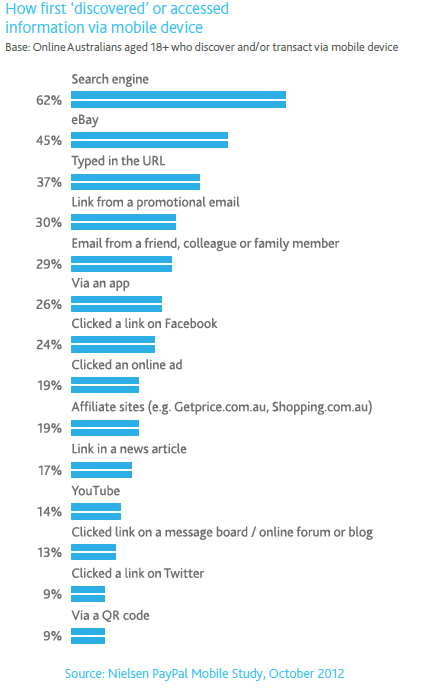 All up, across both mobile devices and PCs, 95% of online Australians now use online media for their research or discovery, the study found. Those engaged in such behaviour are almost as likely to have completed the purchase in-store purchase (75% have done so), than online (71%).

The findings are contained in eBay-PayPal’s joint ‘Secure Insight’ report, which calls the last two years a turning point for Australian retail thanks to a trifecta of pressures: the strong Australian dollar, mobile phones and heightened competition from offshore.

It likens the change in the retail landscape currently occurring at the hands of technology to the birth of the shopping mall in the country – at Roselands in Sydney in 1964. However, rather than taking 50 years to develop, vice president of eBay Australia, Deborah Sharkey, predicts the industry will consolidate under a new omni-channel model within five years.

The future is “overwhelmingly mobile, and it’s increasingly multichannel, on any connected screen” Sharkey predicts.