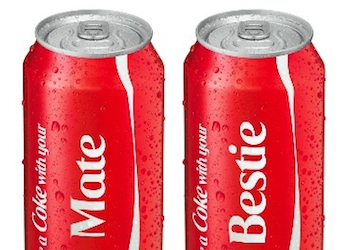 Coca Cola’s much-awarded ‘Share a Coke’ campaign has reversed a decade-long decline in Coke sales in the US, The Wall Street Journal is reporting.

The company’s US sales have risen 2.5% since it rolled out the ‘Share a Coke’ campaign, which began in Australia in 2012 with Ogilvy Sydney.

While The Coca-Cola Company will release official figures in late October, the WSJ has reported that Nielsen store-scanner data found Coke sales in the US rose 0.4% for the 12 weeks through August compared with the same period a year ago.

The soft drink giant’s sales had been falling for 11 years in a row prior to the campaign.

The ‘Share a Coke’ inaugural season in Australia in 2011 was the brand’s most successful summer ever, with young adult consumption up 7%.

The campaign aimed to get people talking about Coke and actually consuming the product over summer, on top of simply loving the brand.

Coca-Cola printed 150 of Australia’s most popular names on labels of Coke bottles, encouraging consumers to ‘Share a Coke’ with someone to connect and share the experience.

About 80 countries have since taken on the ‘Share a Coke’ campaign. In the US, the company printed 250 of the most popular names among teens and millennials onto Coke bottles.

Coke senior brand manager in the US Evan Holod said the company would give “serious consideration” to bringing the ‘Share a Coke’ campaign back to the US next year, according to WSJ.