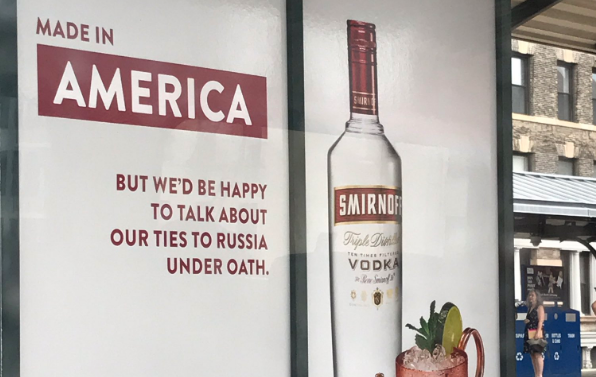 The out-of-home campaign features signage with the message ‘made in America, but we’d be happy to talk about our ties to Russia under oath.’

The campaign, by 72andSunny New York appears in various sites across the city’s public transport system.

In a recent press conference, Trump told reporters he would testify under oath about accusations of ties with Russian officials, though critics remain skeptical that he’ll follow through with this.

Smirnoff’s ‘ties with Russia’ date back to its foundation in Moscow by Piotr Arsenievich Smirnov in the 1860s. There it was distilled, until the Russian Revolution, when his heir escaped to Turkey before moving around Europe. In this time the spelling was updated to the French ‘Smirnoff.’

Throughout the years that followed, Smirnoff changed hands many times, until in 1997 when it became a part of Diageo.

Today it is distilled by Diageo in Illinois.

Previous Article
ThinkTV’s study reveals industry professionals “out of touch” with ordinary people
Next Article
Survival of the real brands: New York Times global COO on winners and losers in the digital revolution