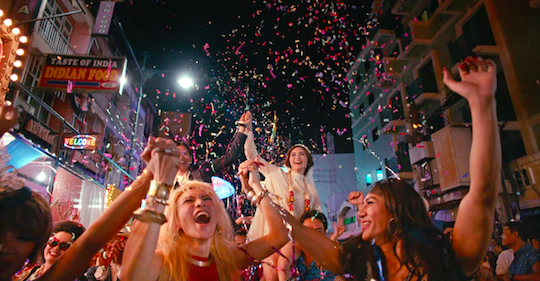 Diageo vodka brand Smirnoff has launched its largest ever global marketing campaign, celebrating the brand’s philosophy of ‘inclusivity’ in partnership with musicians from around the world.

With agency partners 72andSunny NYC and Vice, the brand aims to create a “global social movement powered by music collaborations that span the globe” using the hashtag #WhatWeBring.

The #WhatWeBring video, shot on four cameras and an iPhone, “in a style that will appeal to millennials”, is a montage of story lines celebrating diversity of age, race, gender, sexuality, culture and style. Featuring Kiesza and Djemba Djemba’s song ‘Give It To The Moment’, the video follows stories including a same-sex wedding and a diverse group of individuals celebrating on a crowded Bangkok street. Characters in the video are enjoying Smirnoff Electric vodka products.

A #WhatWeBring full length documentary, to be released in November, will follow musicians from around the globe remixing the track and showing off their talents. Artists set to mix the track come from genres including hip hop, pop, Shangaan electro and old and new Japanese styles. The five artists from five different continents are:

The campaign will leverage new media opportunities including native digital content and social influencers to engage its audience.

“We believe millennials is a psychographic, not a demographic so #WhatWeBring is unlike anything we’ve ever done before, designed to carry a message of inclusivity around the world.

“We want our actions to mobilise a community and help them articulate their belief – that ‘including’ is how we create a better present and better future.”

Previous Article
How to create a culture of intrapreneurship to get the best out of your teams
Next Article
The flaws of NPS: helpful or a failed system?