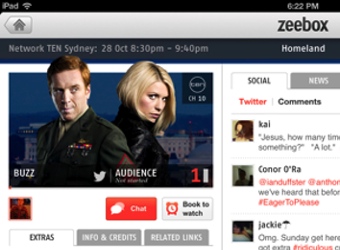 Social TV app zeebox has captured a significant audience since launch two weeks ago, with 100,000 downloads to date.

The app, which provides social TV integration with most networks and shows on free-to-air television, allows users to check-in to shows, chat with other viewers and get more information on shows.

Downloads have been higher than expected, but even more importantly engagement among its audience has been strong, CEO of zeebox Australia Craig Blair says.

“Our average viewer is spending over half an hour a visit engaged with zeebox,” Blair reveals.

“It’s early days but the results so far have far outstripped our expectations. The number of downloads in Australia is many multiples higher than the UK or the US (adjusting for population) proving that Australians actively embrace new, world class platforms.”

The app’s active audience is spending on average 31 minutes per visit in the app.

The company, which is headquartered in London and has offices in New York and Sydney, was founded in 2011 by former BBC iPlayer CTO Anthony Rose and EMI executive Ernesto Schmitt.