The Queensland Government has run the ‘Climate Smart’ campaign since 2009 as a community engagement strategy aimed at securing early and affordable greenhouse gas reductions across the state. The objective is to achieve this through voluntary household and personal lifestyle changes. The Queensland Government is committed to reducing emissions so that it can play its part in meeting a national reduction target of 60 percent below 2000 levels by 2050.

On behalf of the Queensland Government, Sapient Nitro enlisted Chilli Promotions’ indent expertise to produce a thermometer that would form part of a personalised education pack that would be distributed to over 300,000 Queensland residential properties by electricians after a Climate Smart Home service was performed. 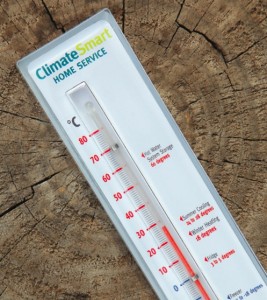 Sapient Nitro (Brisbane) came to Chilli with a brief that required a custom-made, economically-priced, environmentally-friendly promotional product. The product had to support the Queensland Government’s ‘Climate Smart’ campaign in increasing awareness within the wider community about the impact reducing emissions could have on slowing climate change.

The idea behind the Climate Smart thermometer was to encourage recipients to put the thermometer in their refrigerators so they could set them at an optimum temperature (between 3 to 5 degrees Celsius) to reduce emissions.

In light of Chilli Promotions’ unique carbon offset offering and experience in environmentally-friendly promotional products, Sapient Nitro entrusted Chilli with the task of producing the 300,000 thermometers. The challenge was to meet a limited budget of less than $2 per unit and to ensure that the thermometers were accurate and tested for safety. Through its existing relationships with factories in China, Chilli was able to negotiate a price that fit the client’s budget. Prior to mass production, Chilli provided the client with pre-production samples of the thermometer for approval. Only once the samples were approved did mass production commence.

The main challenge encountered was coordinating the logistics and production of the thermometers between three different factories in China. To oversee the process, Chilli sent its offshore production manager to China to manage the project and to ensure the quality of the products being manufactured. Chilli also engaged an independent testing house to perform quality checks. An independent laboratory tested the temperature range of the thermometers. A report was supplied which included images allowing us to make the final decision as to whether the products passed quality expectations.

The Climate Smart thermometer was supported with a state-wide campaign that included a television and radio campaign, direct mail, online advertising, a specific website portal, pull-up banners and various events.

The thermometer was distributed by electricians and plumbers and also mailed out to various Queensland homes upon service calls and installation processes. The goal was for Queensland residents to use the thermometer to measure the temperature of their hot water, fridge, freezer and air conditioners to ensure their appliances were running at optimum temperatures for energy and water saving efficiency. 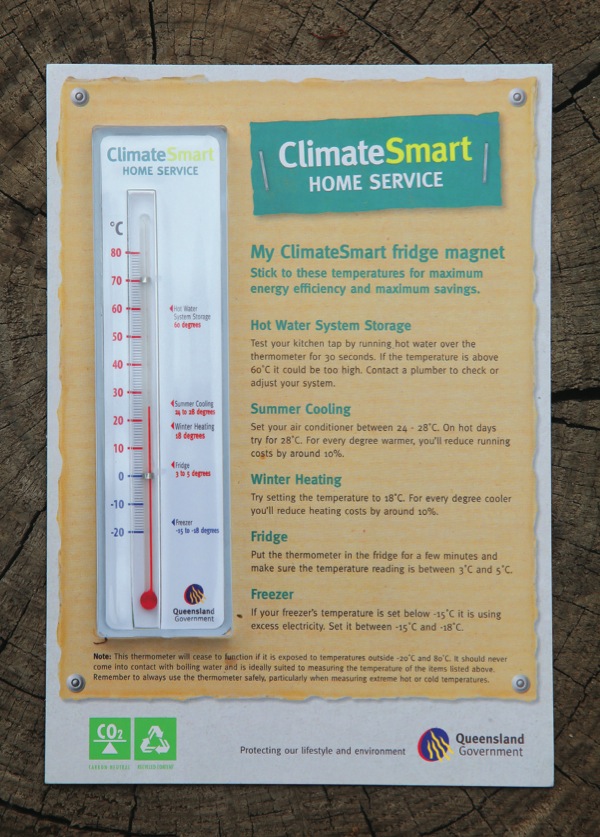 A custom-designed and printed acrylic thermometer with magnetic backing was designed and was supplied on an A5 printed recycled paper backing card and packaged in a 100 percent biodegradable and compostable plastic bag. The product underwent stringent testing for food safety and quality and was made to be within +/- 1 degree accuracy. The pack was completely carbon neutral.

While exact statistics are confidential, over half the thermometers have now been distributed into Queensland homes. Some fast facts:

Tags:
Previous Article
B2B brands or baby turtles – which can survive?
Next Article
Goodbye, Facebook, and thanks for all the fish…