The ABS is letting Australians ‘run the town’

The ABS is letting Australians ‘run the town’ 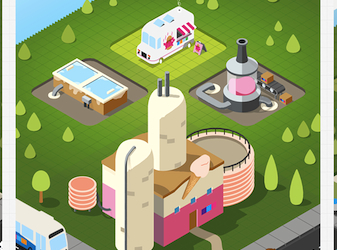 The Australian Bureau of Statistics (ABS), in conjunction with Leo Burnett Sydney, has launched a mobile game called Run That Town, which allows players to get involved with Census data by letting players take control of any town in Australia.

The game is the first of its kind to be released by a national statistical agency using real Census data and is part of the ABS’s effort to make Census data more relevant and compelling to Australians.

When playing the game, players are challenged to make planning decisions based on 2011 Census data to boost their popularity, grow the town and keep the locals happy.

Sue Taylor, director in the 2016 Census, says, by using core demographic data, the game demonstrates, in a simple and visual fashion, the many ways Census data can be used by everyday Australians in a light-hearted and entertaining way.

“Run That Town offers a unique insight into how Census data can be used. The game is an innovative and fun way to communicate with the public, while embracing digital media.”

“Run That Town is a strategy game with a twist that is intended for a wide audience offering both one-time and ongoing users a unique insight into the value of Census data,” she says.

“The response so far to Run That Town has been overwhelmingly positive. People are finding a game about statistics fun and surprisingly addictive. And they’re discovering more about their local area as well,” says Andy DiLallo, chief creative officer of Leo Burnett Sydney.

“The great thing about this project is we’re not just telling people about the data – we’re giving them a chance to use it for themselves. It’s an innovative way to make those numbers really mean something to the people using them, and to get the community more involved in Census data,” DiLallo adds.

Run That Town can be downloaded for free from the App Store and played on all current Apple devices. It was created by Leo Burnett and Millipede Creative Development.

For more information and to download the game, visit http://runthattown.abs.gov.au.

Tags:
Previous Article
New Lean Cuisine campaign confession: “behind every successful woman is her microwave”
Next Article
Poise panty-liners ad found not to be encouraging bullying