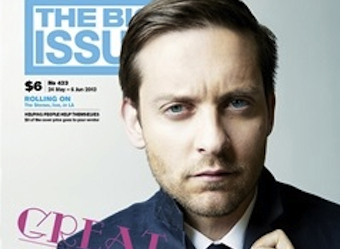 The Big Issue is going digital, launching a digital version of its print magazine from tomorrow, while Fairfax has revealed details of its digital subscription packages for The Sydney Morning Herald and The Age.

Customers will be able to buy online access to The Big Issue from vendors in the form of a digital access card that will be sold alongside print copies.

The Big Issue CEO Steven Persson says the digital edition would not replace the magazine, but instead give people a choice in how they read it.

“We recognise that an increasing number of people now prefer to read magazines online,” Persson says. “By offering a digital version, we hope to meet the needs of customers and reach out to new audiences to help increase sales for vendors.”

The Big Issue in Australia will be among the first ‘street papers’ in the world to offer a digital edition, with the UK’s The Big Issue in the North launching an online edition last October.

The digital edition will have the same content as the fortnightly print edition and the will vendors continuing to earn $3 from every sale.

Fairfax Media has today announced that digital subscriptions for The Sydney Morning Herald and The Age across Australia, New Zealand and other Asia-Pacific countries will commence from 2 July 2013.

The announcement follows the successful overseas launch of digital subscriptions across North America, Europe and the Middle East in March this year.

Digital subscriptions for The Sydney Morning Herald and The Age websites and m-sites will operate as a meter model, allowing free access to 30 articles a month. The tablet apps will use a freemium model, which means certain sections will be free, with others will only accessible to paying subscribers.

“The introduction of digital subscriptions for The Sydney Morning Herald and The Age websites, m-sites and tablet apps is the single most significant development to our digital strategy since Fairfax Media began producing digital content and products. It is an important step in our strategy as it provides our business with additional revenue streams,” says managing director, Australian Publishing Media, Allen Williams.

“Fairfax Media has invested a considerable amount of time researching audience-centric digital subscription models. Our approach is simple; visitors will be able to continue to enjoy our content just as they do now, with minimal disruption, and subscribers will have access to a higher level of content plus additional benefits,” he says.