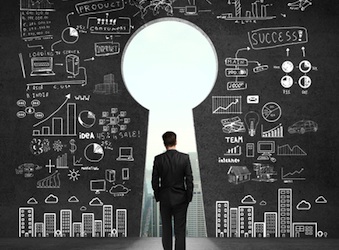 New research from the Interactive Television Research Institute at Murdoch University has rejected the wide-held belief that TV advertising needs to be simplified for smaller screens.

The growth in digital marketing has seen the belief emerge that  television ads need to be simplified to better fit the smaller screens of mobile devices. The Murdoch University team put this theory to the test with surprising results published recently in the Journal of Advertising Research.

“Traditionally audience screen testing has been done by putting people’s heads in a brace while they are viewing ads on TV screens and mobile devices so that researchers could control how much attention the viewers were giving the screen,” says ITRI deputy director Dr Steve Bellman.

“Results from these sorts of experiments showed that TV ads really didn’t work well on little screens and a lot of effort was put into adapting TV ads by removing background shots or little print.

“We decided to take a different approach, looking at advertising on mobile devices in a more realistic way.”

The Murdoch team recreated experiments that ran the same ad across a range of devices including TV sets, desktops, tablets and mobile phones. The researchers allowed participants to hold the mobile devices so that they could adjust the screen to a comfortable level for their vision.

“We found that when people were able to control their viewing angles there was no difference in the effectiveness of a television ad when played on these devices,” Bellman says.

“This has huge implications for marketers who have been concerned with stripping out content of TV ads for digital media.”

The research then went on to investigate how to create synergies in advertising across different devices through tailoring the format of the ad.

“We had established that it was not necessary to cut content out of TV ads but we were really interested in finding out whether adding interactivity to ads shown on mobile devices and PCs improved their effectiveness,” Bellman says.

“Results showed that interactivity could make a significant impact on certain demographics who were heavier users of mobile devices.

“Like everything, it’s just important to know who your audience is and how they are being exposed to content.”

The research group will continue to work in this field looking at differences in viewers and viewing environments.

Tags:
Previous Article
Have your say about Marketingtv
Next Article
Tourism Victoria’s vicarious campaign ‘Remote Control Tourist’ lets you go before you go