Ad spend by media type continued on trend through the first three quarters of 2013, according to Nielsen’s quarterly ‘Global AdView Pulse’ report, with television and online display advertising leading the charge globally. Overall, the global ad market saw a 3.2% rise in spend year on year, buoyed by consistent growth in the Asia-Pacific region.

Online display ads grew by more than 32% in the first three quarters of 2013 compared to the same time period for the year prior. But despite the rapid growth of display ad budgets, TV continues to reign supreme with a 57.6% share of all ad spending and advertisers investing 4.3% more into the medium. Even in Europe, where total ad spending has been trending negatively for several consecutive quarters, TV advertising spending remained flat during the first three quarters of the year. 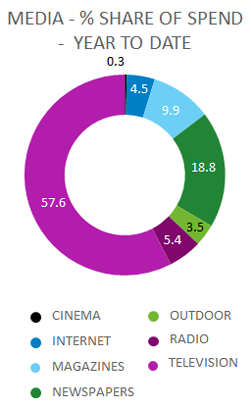 European advertisers, however, cut 6.5% of their ad spending on radio during the first three quarters of 2013. On the other hand, Latin American advertisers invested 12.4% more on this media type. Globally, radio advertising spending has decreased by 0.7% year-to-date. Also trending negatively, ad spend has dropped in newspapers, magazines and cinema (2.2%, 1.1% and 1.3% respectively), as advertisers increasingly move their ad budgets to both television and online display.

“While it comes as no surprise that internet is the most rapidly growing media type for advertisers, television is still the leading medium by spend by a long shot,” says Randall Beard, global head of advertiser solutions for Nielsen. “But the really exciting development is how the two can work together. We are consistently seeing advertisers turn to integrated campaigns to connect with consumers on multiple screens, reinforcing their messages strategically to maximise impact.” 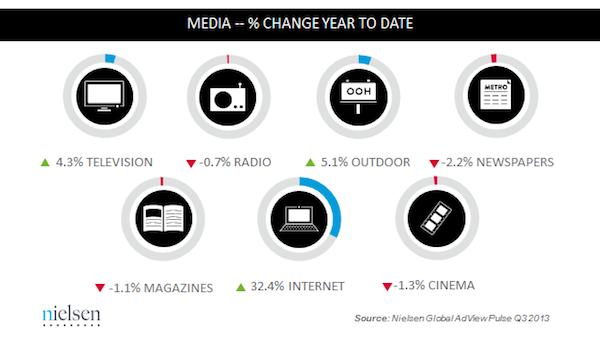 Meanwhile, the embattled European ad market experienced a slight reprieve, with only a small decrease of 0.4%. This contributes to a 3.8% fall when looking at the first three quarters of the year. Nielsen notes that the negative trends in Europe’s advertising market finally appear to be bottoming out.

North America’s ad market waned slightly (1.3%) during the third quarter but still ended the first three quarters with a gain of 1.7%. The small decline in the region’s third quarter ad market partly reflects this year’s decrease in political advertising, which ruled the airwaves in advance of the US election last year. 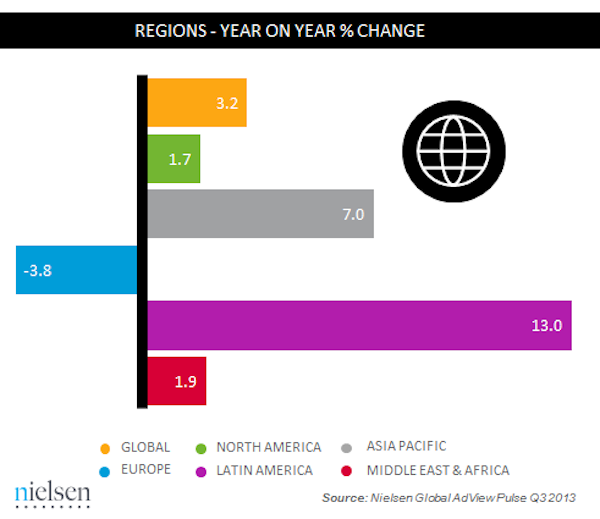 Tags:
Previous Article
3 areas where mobile marketing opens up opportunities for B2B marketers
Next Article
Give your small business a New Year check up – and get your staff involved in it