Vodafone CMO: “We’re light years from where the brand was a few years ago”

Vodafone CMO: “We’re light years from where the brand was a few years ago” 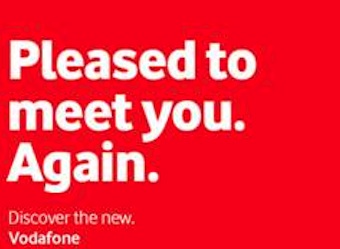 Vodafone Australia has launched a new multi-million dollar campaign in a bid to refresh the look and feel of its brand and win back the hearts, minds and custom of the public, with its CMO saying its the right time to be bold.

This is the first comprehensive campaign for Vodafone in a few years after the company has been pouring its resources into upgrading its network and dealing with a customer service fallout that saw the telco lose $1.2 billion and the exodus of a million customers in 2011 and last year.

Internationally, The Brand Union agency has led the development of the core brand identity, which replaces the Vodafone ‘tetris’ with a flexible rhombus shape that anchors to the Vodafone roundel.

Vodafone Australia has worked with its agency Ogilvy under the direction of Steve Back on the new campaign.

The launch of the campaign this week sees outdoor ads across Australian capital cities featuring the new visual identity and inviting customers to ‘Discover the New’.

Kim Clarke says she is excited to be launching a comprehensive campaign that will be unveiled over several weeks: “This is a bold campaign that doesn’t shy away from asking ex-customers – many of them now not feeling quite at home with our competitors – to reconsider Vodafone,” she says.

“We are light years away from where our brand was sitting a few years ago and we can feel it internally, we hear it from our customers who have noticed the improvements we’ve made to our network and customer services and there has been an extremely encouraging response from customers and non-customers alike for our 4G network, which offers among the fastest data speeds in the country.”

“I strongly feel it is the right time for Vodafone to be bold, be brave and be straight up in asking customers to reappraise our brand. These are the values we hold true as a company and reflect those of our customers, who look at the world with fresh eyes. We want to attract their attention and to discover the new Vodafone.”

The new Vodafone TVC will launch in the coming weeks and will be supported with outdoor, online and catalogue advertising.

Tags:
Previous Article
The man your man could smell like is coming to Australia for local Old Spice relaunch
Next Article
Brand profile: Love it or loathe it, that’s what Collingwood FC wants