Dreamworld is no stranger to controversy. The theme park, based on Queensland’s Gold Coast, has been under public scrutiny for years. It started with the 2016 tragedy that saw four people lose their lives at the park. Since then, Dreamworld is fihgtin an uphill climb to repair its broken reputation. And, with its latest controversy, Dreamworld has done nothing to help its public image.

In 2019, the Queensland government provided Dreamworld with $2.7 million taxpayer dollars. The money was given as a donation to go towards building a state-of-the-art facility. The facility promised to be a place to protect endangered koalas. Not only a facility to look after koalas who had become displaced due to natural disasters, it was also a research facility. Dreamworld’s lab promised to carry out research that would reverse the endangered species status, protecting one of Australia’s most beloved creatures.

However, the funds weren’t used to fund the “first of its kind” lab.

The controversial ‘fun park’ took the funds and built a glitzy new roller coaster. Launching a new ride was the priority. Enter: the Steel Taipain. This $30 million rollercoaster is a direct replacement of the doomed Thunder Rapids. Opening in December 2021, daredevils took to the attraction. However, in July 2022, the theme park was forced to admit that the funds for the koala research facility had been used to build the park’s latest attraction.

No stranger to controversial copy, Koala entered the conversation about Dreamworld’s dodgy funds. The mattress business released a blitz campaign having a dig at the theme park giant.

Koala bought print ads in news outlets across the state of Queensland, including Courier Mail and the Gold Coast Bulletin. The ad cheekily unveiled the company’s conservation efforts as well as its partnership with animal welfare group WWF Australia.

“No rollercoasters were harmed in the making of this ad”, reads the copy.

The message has been spread further across the eastern seaboard with a targeted digital ad campaign.

Koala’s creative director Taylor Thornton spoke about the campaign. “Koalas are so much more than just the name of our business. They’re an Aussie icon and we couldn’t let this slide. And we’re proud to say that through our ongoing partnership with WWF-Australia, we’ve donated over $1.5 million to help regenerate koala habitats.” 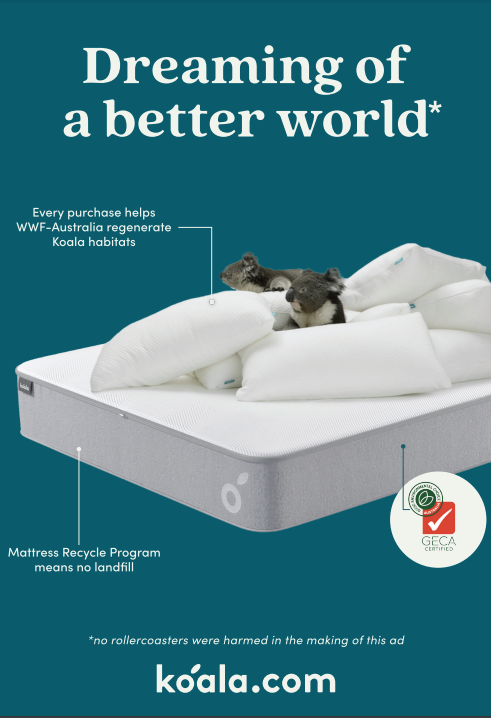