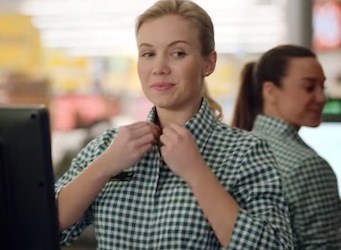 The campaign launches with a TVC that follows a cast of Woolies farmers, suppliers and staff as they prepare food for customers, set to the classic jingle ‘We’re Woolworths the Fresh Food People’, featuring Australian musician Nathan Cavaleri.

Woolworths CMO, Tony Phillips says, “The campaign captures the very essence of what makes Woolworths great and unique. It tells the story of our legacy as the Fresh Food People for more than a quarter of a century, and the people who make it possible, the suppliers, growers and staff who bring fresh, contemporary produce to millions of customers every day.

“Make no mistake, the history of Woolworths is the Fresh Food People and we have embraced the huge opportunity to bring it back. I believe that we have created a moment in time that people will reflect upon, and I am honoured to be part of it.”

Todd Sampson, CEO Leo Burnett Australia says the new campaign is the first step in a multi-pronged strategy for Woolworths. “It’s an important one as it lays the foundation for what’s to come. But it’s what Woolworths will build on that foundation that’s really exciting.”

The campaign returns to a theme that has featured on Australian screens for nearly 30 years.

The campaign premiered last night (Sunday 10 August) with the 90-second spot airing during Channel 7’s X Factor and will run on free-to-air and pay TV, with 60-second and 30-second iterations from today.

The integrated campaign will span print, online, radio, street and transit media right through to October with online 30-second pre-rolls running on YouTube.